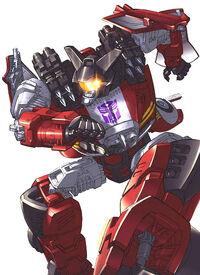 Ricochet and his twin brother Jazz are the elite bodyguards of the evil Optimus Prime. But where Jazz is cool and cruel, Ricochet is manic and malicious, acting first and asking questions never. He's famous for brutal battlefield slaughters that have left few Decepticons alive to take prisoner. His wild shooting sprees are the mark of a dangerously unhinged being, the exact image Ricochet wants to project.

Though he puts on such displays primarily as an act, the "crazy" thing isn't actually all that far from the truth. Ricochet is both afraid to the point of paranoia of betrayal within his own ranks by those who covet his high position, and is also haunted by the knowledge that his brother is Prime's favorite of the two. His rampages serve to both increase his kill-count to look good in Prime's eyes, as well as "accidentally" take care of any would-be usurpers... and who knows, maybe one day Jazz might "accidentally" end up a casualty... that would be such a pity.

In robot mode, Ricochet can use his shoulder-mounted missile pods with deadly accuracy up to a distance of .9 miles from target, and he can shoot them from virtually any physical position he may be in with equal effectiveness. He has been known to glide for more than 3000 feet using his rear-mounted ailerons. Ricochet transforms into a Bugatti Veyron mid-engine sports car, with rocket-assist for short bursts of increased speed. He can use a roof-mounted version of his missile pods in this mode if necessary.

With Prime on Earth, Ricochet has thrown in his lot with Rodimus, supporting him for new Autobot commander.

"Anythin' worth doin’ is worth overdoin'."

Ricochet and Jazz were oversee the smelting pool along with Inferno, when not attending to Emperor Prime's security directly.

When the Ark launched for Earth, Jazz made it aboard with Optimus Prime, but Ricochet was left behind. He has been enjoying the Junkion attack, and has no idea his brother has been exiled from the Autobots.

Ricochet is available for temping.