View source
watch 01:54
Obi-Wan Finale - The Loop
Do you like this video?
Play Sound
The name or term Greenshirt refers to more than one character or idea. For a list of other meanings, see Greenshirt (disambiguation). 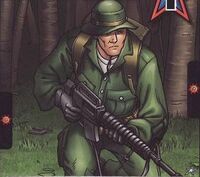 Marksman specialists are there for the GI Joe team when specific Cobra targets need to be acquired and neutralized. Marksmen are the team members who deliver long-range precision fire at selected targets from concealed positions. Recruits in training to be marksman specialists learn fieldcraft techniques and how to gauge distances. They constantly practice their marksmanship skills to perfect their accuracy and hit the target precisely, first round, every time. They also must develop the patience, stamina and discipline to be still for long periods of time, while remaining ready to take advantage of the right moment whenever it presents itself.

Rex HUNTER isn’t your typical marksman. He’s skilled in both ranged weapons and hand to hand combat. It’s not above him to resort to dirty tricks when the circumstances require it. He also places a high value on civilians, often putting himself in harm’s way to protect a child or a similar situation.

In 2018 Rex Hunter participated in a recon mission to Transcarpathia. There he encountered Storm Shadow and confirmed the resurrection of Destro.

Greenshirts counter Cobra Troopers the same way Steel Brigade are counterparts to Cobra's Vipers. While most Greenshirts are Army Rangers, there are representatives from every branch of the military, as well as personnel from the CIA, DEA, FBI, Homeland Security, and other American organizations with an interest in counter-terrorism and national security.

Rex Hunter is played by triaxus.