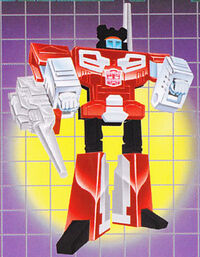 Rewind is a renowned tracker and trainer of Cybertronic wildlife, such as his partner Ramhorn. Blaster hired the quiet hunter in order to be able to counter Sir Soundwave's menagerie of Recordicons, but Rewind is more interested in the fauna of Earth. Rewind's right rifle hypnotizes and stuns wild creatures, while his left rifle can melt together the components of their metal bodies.

In the Shattered Glass universe, Rewind is an archivist who travelled to Earth with the Ark to chronicle the Autobot takeover of the planet. However, since Jetfire’s return, he was commandeered to be the Autobot XO’s personal scribe.

With Jetfire dead, Rewind once again serves Blazter in Iacon. In 2016, he travelled to Earth with Blazter.

This character is available for application. He was @emitted by Bzero for the Shattered Glass TP.

Retrieved from "https://tfumux.fandom.com/wiki/Rewind_(SG)?oldid=60544"
Community content is available under CC-BY-SA unless otherwise noted.