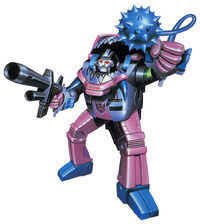 REND was the commander of Dealiticus's Sharkticons legions. He was fearless, vicious, and loyal only to Dealiticus, who upgraded his intelligence and combat ability and put him in charge of his fellow Sharkticons. In water, his powerful tail fin allowed him to travel at speeds over 150 knots. He was carnivorous with a voracious appetite, possessing several rows of razor-sharp teeth that could tear through solid steel. In robot mode, he carried a maceration laser that shot salt-based corrosive liquid accelerated by a beam of coherent infrared energy. He also carried a barbed mace and a bad attitude, and though he could fake politeness when necessary to Deal's customers. On land he was not as sleek or fast as he was in water, and he was eventually killed by Major Bludd.

REND was built by Dealiticus, who upgraded his intelligence and combat ability and put him in charge of his fellow Sharkticons.

Rend kept an optic on Wheelie when Dealiticus found his stowed away in his hold. In 2013, during the Quintesson invasion of Earth, he commanded Dealiticus's science ship Fabrica, on which he oversaw the construction of new Overcharges and Sharkticons.

In 2016 he was killed by Major Bludd during one of Dealiticus's experiments.

Rend was created and played by Bzero.