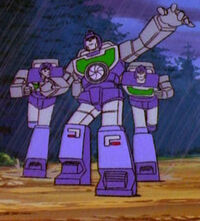 Reflector loves to observe things: vegetation, architecture, Earthen topography, and particularly his comrades' mistakes. He likes to blackmail his associates, and he is very impressed with his own abilities. He can split into three semi-autonomous robots, Spectro, Spyglass, and Viewfinder, each of whom has highly-developed infra-red vision that can record images in darkness, through camouflage and at great distances. In camera mode, Reflector can emit a powerful flash explosion that leaves enemies blind and disorientated for up to 15 seconds.

Reflector is unique among the Decepticons: he is three robots who talk and act in unison as a single mind in three (give or take) bodies. His individual components are seldom called by their individual names; they are all simply "Reflector."

Reflector was with Megatron on the Nemesis during its assault on the Ark. He was thus among Megatron's troops after their reawakening on Earth. Reflector and Thundercracker did some scouting shortly after the Decepticons left the Ark. Reflector demonstrated his ability to zoom-focus and print pictures, Polaroid-style, in camera mode.

Reflector later spied on the laboratory of Dr. Alcazar, the mentor of boy genius Chip Chase. Using his zoom-focus and photographic powers once more, Reflector secretly obtained the entry-code for the laboratory's security system. Reflector later gathered valuable intelligence prior to the Decepticon attack on the Great Falls hydroelectric power plant.

Useful though his reconnaissance abilities were, he also provided a less glamorous contribution to the Decepticons' early Earth campaigns: force of numbers. Many Reflector-bots were seen in robot mode among Megatron's initial forces — far more than the core three. And in one instance, a reverse effect occurred: Two Reflector-bots were absorbed into a third when they forcibly collided. This suggests that Reflector has some sort of body-duplication power.

The nature of the duplicates is unclear, and the issue was made only muddier by one incident: When Starscream needed someone to guide a shipment of energon cubes on the still-experimental Space Bridge, he selected a lone Reflector-bot, who protested in panic. There was no implied connection to the other Reflector-bots, and his voice lacked the echoing modulation that Reflector usually possessed. Starscream seemed cavalier about the prospect of losing him; however, as he survived the trip to Cybertron, it's unknown what effect his destruction could have had on the other Reflector-bots. To make matters more ambiguous, Starscream referred to him as "warrior" in a manner that could've been either a description or a proper name. So whether he was truly a part of Reflector, or if he was an independent "Warrior" who simply bore an uncanny resemblance, remains uncertain.

Reflector remains a member of Decepticon Intelligence. In 2013 he was sent to the Toxic Sludge Swamps of Cybertron to document a massacre performed by an unknown assailant.

Note: The real-world explanation for Reflector's initial overabundance was that he made a handy generic with which the animators could pad out the meager Decepticon ranks. This need became less acute as more Decepticons joined the cast. Also, the series story bible discouraged use of the character, as Hasbro had decided not to sell his toy at the time.[1] Thus, he was eventually phased out completely.

<The Decepticon spinny fades to an image of three robots standing together, the trio known as Reflector. The three robots give their report in perfect unison.>

I was tasked for emergency reconnaissance in the Toxic Sludge Swamps of Cybertron. Intel intercepted a report of an Autobot training regiment under attack in the bog. <The shutter on Viewfinder's chest clicks, and the screen briefly shows an image of numerous Autobot bodies scattered around a training camp, in all manner of death.> I didn't arrive in time to catch the culprit, but I stuck around to observe the cleanup. <Viewfinder's shutter clicks again, and the screen shows an image of heavily armed Autobots sorting through the various dismembered limbs of their comrades.> I checked with Intel to confirm that we had no operatives in the area. This massacre was perpetrated by unknown assailants. The strangest detail I managed to acquire is that, allegedly, there was only one attacker. <Viewfinder once again clicks his shutter, showing a blown-up photo of a report transcript, as displayed on the datapad.> Whether this was the work of one or several, there is a rogue element in play out there...

<All three of the robots reach for the off-switch at the same time, fading the image back to the Decepticon insignia. The timestamp on the report registers as two days ago. Analysis of data loss indicates that unknown interference caused the message to reach Earth two days after it was recorded.>

All three characters comprising Reflector are played on the MUX by a single player. Reflector is sometimes temped by Bzero, who tends to play up the differences between Spectro, Spyglass, and Viewfinder. Reflector was last logged on by Dean in 2013. He was @emitted by Zerombr in 2017 and 2019.