View source
The name or term Red Alert refers to more than one character or idea. For a list of other meanings, see Red Alert (disambiguation). 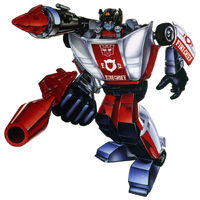 Paranoia is the character trait that makes Red Alert as good as he is at his job. Nothing escapes his notice - a whiff of smoke, a whisper of crackling electricity, a faint scent of fuel exhaust. Anything, no matter how small, that triggers his sensory circuitry directs his thoughts immediately to the expectation of trouble. Most of his comrades find his edgy, driven nature an unwelcome presence among their ranks, but they all appreciate his dedication to his duty. "He may have a few wires crossed in his logic center," says Inferno, "but at least his optical sensors are looking straight ahead."

Red Alert can trigger an electronic alarm on each of his fellow Autobots. His sensory perception is excellent. His visual acuity is such that he can pinpoint a 2 cm microchip at 1200 feet. He can hear a pin drop - at a distance of 1.4 miles! And his olfactory module can detect odors as weak as 2 parts per million. In vehicular mode he is among the fastest of the Autobots. In robot mode he carries a shoulder-mounted rocket launcher that has a 25-mile range, and a high-energy particle beam rifle.

Red Alert's paranoia and nervousness make him susceptible to rash judgments. Consequently, his actions can be injurious to both himself and his fellow Autobots, if he's not careful.

Near the start of the war, Red Alert, then called Flare, was assigned to a lonely outpost at the edge of the Manganese Mountains. Bored beyond belief, Flare was a bit of a goof-off, neglecting guard duty at times because, seriously, there hadn't been a Decepticon seen in the area in stellar cycles. The rare bit of excitement was the quartexly supply deliveries, and even those eventually became merely dull routine. So when one showed up slightly late one cycle, Flare just waved them through, not even bothering to check the crates -- after all, the last 300 times it was the same old stuff.

That was a mistake. This time, the supply run had been hijacked by Decepticons, who used the shipment to sneak right past Flare and into the base. There, they set explosives and ran -- the last thing a confused Flare saw before the titanic explosion was the fleeing saboteurs, and by the time he realized what was happening everyone he knew on base was dead.

Flare was never quite the same after that. Soon he changed his name to Red Alert, and slowly built his reputation never allowing something like that to happen again.

Red Alert arrived on Earth during the initial impact of the Ark into the planet. He had been present when the Ark crashed onto prehistoric Earth during the encounter wih the Nemesis, but due to being in the more heavily-damaged Ark belowdecks, he was not recovered and repaired for almost a year.

Red Alert assisted Inferno when the Dinobots accidentally set Autobot headquarters on fire. He and Inferno later helped Prowl and Jazz corral some motorcycle rustlers who got transported into the future by a time warp.

The Autobots were testing the powerful Negavator superweapon they had built in cooperation with the United States Military when the Decepticons attacked, intent on stealing the weapon. Optimus Prime ordered Red Alert and Inferno to stay inside and guard the bunker as the rest of the Autobots took the fight to the Decepticons. Inferno chafed to fight the Decepticons and left Red on his own despite the latter's pleas for him to stay. During the battle, Decepticon attacks caused the bunker to catch fire and become damaged (much to Grapple's dismay), knocking Red Alert on the head and burying him under rubble. Realizing what happened, Inferno and the other Autobots returned to rescue Red. Unfortunately, the blow to his head damaged Red's logic circuits, making him more paranoid than usual, and caused him to flee the other Autobots in fear that they would take him apart and use him for spare parts. He also became thoroughly convinced that his pal Inferno was after his job and so he escaped the Autobots. Red Alert's damage was such that if he was left untreated, his circuits would eventually explode, and so the Autobots immediately left to find him.

Meanwhile, Starscream (who had once again fallen out of favour with Megatron) used Red's paranoia to his own advantage by pretending to form a partnership with the Autobot, feeding his paranoid state, encouraging him to steal the Negavator and use it to destroy both the Autobots and Decepticons. With Red Alert's knowledge, the pair infiltrated the bunker and stole the Negavator, just in time for Megatron to seize the weapon and for Starscream to reveal his true cowardly ways. Fortunately, Inferno saved Red Alert from himself and his Decepticon 'allies'.

Once, Cosmos radioed in to Teletraan I to inform the Autobots he had uncovered data on a new source of energy upon Saturn's moon of Titan, but was under heavy fire from Astrotrain. Optimus Prime began to order Cosmos to transmit the data, but Red Alert overruled his commander, saying it was too risky as the Decepticons might monitor and intercept the transmission. Prime acknowledged Red's caution, and instead sent a team of Autobots out aboard Omega Supreme to meet Cosmos.

When Autobot City came online, Red Alert was made Security Director of the city.

In 1999, Kup assumed command of security forces in Autobot City so that Red Alert could return to the Ark.

In December of 2009, Red Alert was again made Director of day-to-day security at Autobot City, where he was deeply unpopular. He reported to Metroplex directly with any security problems, which in Red's mind were many.

In 2012, Blaster and Red Alert travelled to the Temple of Knowledge in Shattered Glass Cybertron to help guard Alpha Trion while Trion attempted to build a device to close the rifts between worlds. However, before Trion could complete his device, the Temple of Knowledge was attacked by Ultra Magnus, who teleported into the temple with the use of one of Wheeljack's Stellar spanners.

Red Alert and Trailbreaker defended Alpha Trion, preventing Magnus from killing him directly. Blaster defended the temple, attacking Tracks and getting his one of his optics burned out in the process. Magnus attempted to use a doomsday device to destroy Cybertron, but before Wheeljack was able to complete the device Dust Devil preemptively activated it with the Terminus Blade. Magnus attempted to escape before the doomsday device detonated, but Trailbreaker tossed it through the Wheeljack's portal before it closed. It is unknown if Magnus and his troops survived the deontation.

Soon after, Throttle was assigned by Sir Soundwave to assist Alpha Trion in the Temple of Knowledge. Although initially distrusted by Red Alert (surprise!), she was welcomed by Blaster and Trailbreaker. Once Red was able to definitively confirm Throttle's allegiance and identity, he asked her to patrol the Manganese Mountains until needed for infiltration and sabotage missions.

As of the end of 2012, Red Alert was in charge of Temple of Knowledge security. When the rift between universes was closed, Red Alert returned to the Ark on Earth.

In 2015, Red Alert fronted an investigation after a large explosion detonated in Autobot City, nearly killing Jazz, and injuring Optimus Prime, Blurr, Blaster, and Jetfire. Red Alert arrested Jetfire for the act, based on an audio communication picked up by Blaster, and a newly-discovered meeting between Jetfire and the Decepticons. Red Alert moved one step further, temporarily stripping all security access from Decepticons who have defected to the Autobots, including Skyfire.

In 2018, Red Alert led a team that rescued captives taken by Nightbird. However, Red was so unsettled by the experience that he offered to resign as Security Director.

Red Alert's face appears on the screen, is tiny little optics narrowed, his facial expression seems to be rather plain serious, one might even notice a little hint of frustration as he twitches slightly.

"Greetings fellow Autobots..." He begins, his voice calm. "... I have left the base a couple of cycles away, to investigate on... Strange things that happened and caught my attentions, but those aren't the matter at end at the moment... When I left... Everything was perfect! I managed to update all our security problems and even make of Metroplex a safe place for the common of Transformers... And then, I come back, and what I see?"

Red Alert twitches a little. "All my efforts were ruined, look at Metroplex! What have you all done during my absence? I cannot believe you were so careless! An entire legion of Decepticons could be in Metroplex and we wouldn't -even- know it, this is unforgiveable! But fear not my friends! I, Red Alert, shall remedy to this situation! You can rest soundly, since I shall take the matters at hand and fix everything that needs fixing!"

"I haven't had the time to read all the recent events that happened, but so far, all that I read were... Bad news. Ultra Magnus, I thank you to have taken the responsibilities of the security during my absence, though I shall take this burden back upon my shoulders. You have been doing a great job, but I am afraid we need someone with experience and skills in this field if we want result! From now one, consider Red Alert back and up! I shall double efforts, I should double my awareness, I will not rest until our bases are fully secured! Red Alert out."

In the Shattered Glass universe, Director Alert is head of the Autobot secret police.