View source
The name or term Razorclaw refers to more than one character or idea. For a list of other meanings, see Razorclaw (disambiguation). 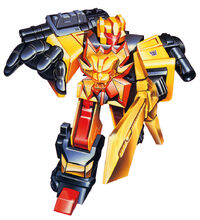 Razorclaw is all business - cruel, brutal business. He despises waste in any form. He does not spend a second of his time or burn a drop of his fuel unless he's certain of tangible results. In his case, that typically takes the form of the smoking wreckage of an enemy Autobot. Those who are not familiar with him often mistake his long stretches of inactivity for laziness and disinterest. That can be a fatal mistake. For, upon closer inspection, one would see that his eyes never close, that they are constantly shifting their gleaming steely stare, monitoring all they see. And when Razorclaw observes that the moment is just right, he explodes into furious, ferocious action. These belligerent bursts of energy usually only last a few seconds, but that's usually all it takes for Razorclaw to demolish an opponent. Afterwards, he returns to his resting state - keeping his own counsel, watching all around him... and waiting for the next right moment to strike!

Razorclaw has enormous strength. In lion mode, he can leap distances as long as a football field. His claws can rip through foot-thick steel with one swipe and allow him to climb up the sides of buildings by digging into their walls. He can run at 90 mph. In both lion and robot modes, he has twin concussion blasters that shoot capsules that explode on contact and release a volatile gas. In robot mode, he wields a sonic sword. It emits powerful vibrations that shatter the crystalline molecular structures of metals on contact, enhancing the sword's cutting power tenfold. He combines with his fellow Predacons to form the giant robot Predaking.

Razorclaw is sometimes partially immobilized by his joints locking in place following his often long periods of inactivity.

Razorclaw and his Predacons remain one of Megatron's most powerful allies. On Friday, May 24th, 2013, several Cobra, G.I. Joe, and Transformer individuals, including Razorclaw, disappeared from all over the world, awaking in the past. However, after helping to fix a problem threatening to alter the timeline, they were returned to the present. 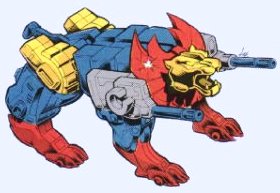 "Field Commander Razorclaw, reporting... and as you can likely see for yourself, the attempt to move the supplies confiscated in reclaiming Castle Decepticon to Stanix did not fair well."
"An ambush to retake their supplies had been expected.. but with the current state of most of Autobot high command it was anticipated their remaining officers would be too preoccupied keeping their forces together to deal with the convoy. This proved to be untrue, as the Femme Commander herself lead the blitz. She engaged me directly to force my focus and not cut down the lesser forces accompanying her... And even sacrificed one of the transports loaded with munitions in an attempt to disable me." He pauses, and then grunts, as if accounting for his state to that rather than the femme herself. "And then kicked me down an old access shaft when that wasn't entirely effective. One of my felinoid legs broke in the fall, so I could not climb out again." Not to mention being knocked cold by the landing, but he doesn't mention that.
"Coldsnap is to be commended for his assistance, engaging both the Aerialbot and a medic present by himself. When I was... indisposed he initiated standard denial protocol, as I am told using his cryogenic abilities to render another transport predominately useless before withdrawing with the remaining forces. Due to him remaining cool under pressure," if the humor of that line occurs to him Raz's almost featureless expression doesn't show it, "this was a rather Pyrrhic stalemate rather than a loss, as the Autobots regained very little of what they had previously lost at the Castle. We are down three transports, several low clearance soldiers, and I will be off the frontlines for a few days... but this is war, sometimes the only option is to cut losses rather than hold out to unrealistic odds."

"Although the Autobots managed to get Iacon's defenses up at the last minute and sparing their precious little blight upon Cybertron's surface, Predaking's assault upon the so-called Spirit of Freedom, in conjunction with Soundwave's sabotage of the engineering section, was a complete success. The engineering attack prevented the ship from bringing its full defenses up, and Defensor was kept preoccupied in disposing of the bomb, preventing him from joining the counterattack on the hull against us.
By the time the gathering of assorted Autobots succeeded in doing considerable damage to Predaking the ship was already on its death bed, to the point of slamming into the shield raised to protect Iacon, and breaking apart. As the Autobots fled their floundering prize, at Megatron's command Predaking climbed back onto the ship and obliterated the engine section with his cannon, ensuring the Autobots would have nothing to salave of their ship. All the resources put into that craft, lost to them, worthlessly and nothing to show for it now.
As you can see we... did not have a comforting return to the surface. But it was worth ensuring the victory and keeping the Autobots from turning their new toy onto us."

Two unexpected Eurythmen herald the death of the world, and a most unexpected savior!

moving forward as if it's a normal day, with Leozak reporting to Deathsaurus.

"Lord Megatron, I am pleased to report that we have successfully entrenched our grip upon the Kalis Sector. Let this be a reminder to both factions that there is still a war going on regardless of current events, and the only peace it will end for is under Decepticon rule.

"Building upon the disruptions created by Onslaught's trap... and yes, even Motormaster's rampage helped in such despite his lack of success, Blockade and I staked out an area of the region, and waited. Our patience was paid for when a small Autobot convoy again attempted to transport supplies to their weakening battlelines. As they would likely be expecting an ambush from Onslaught's previous efforts I instead engaged the pair (Imager and Upshot) directly while Blockade provided support fire and prepared out trump card. One I had the pair focused on myself, he blasted the position with one of his potent tachyon shells.

"Yes, this meant he was also firing on me, and I commend his lack of hesitation in doing so to ensure the operation's success. The personal risk was worth the strategic reward." A pause, and then the faintest of chuckles. "All according to plan.

"The Autobots scattered from their injuries, after failing to subdue me despite my own weakened state. The supplies that would of revitalized their frontline were seized, securing our hold on Kalis, and the Autobots will need to expend more time and resources on repairing their severe injuries. I will need some time to recover but Blockade is minorly wounded at worst. Overall, victory claimed with a string of well timed and planned engagements. How war is suppose to be waged.

After a strategizing session with Cyclonus a thorough analysis of our holding of Kalis Region has been made. While the sector is desolate for the most part, the primary advantage of occupation is its proximity to Retoris, giving us a location of tactical importance to, as they say, peer over the neighbor's fence, and monitor the Autobots' activities near their capital stronghold. For example it has already proven useful in tracking their shift in supply routes to hit several of the passes through Nova Cronum as they try to circumnavigate our occupation of the area.
As such several secondary operations are being put into effect to strengthen our hold of this tactical advantage.

- Regular patrols of the Retoris and Praxus borders, both to monitor the Autobots and reinforce our own boundaries.
- In addition to monitoring Autobot activity, scouts are tasked with finding the primary passages into Praxus. Once Kalis is fully secure we intend to push into that sector next. As trying to take Retoris itself would be a foolish waste, instead we will make an effort to cut it off from the rest of Cybertron as much as possible to farther hinder the Autobots' movements.
- A unit of Operations and Logistics personal is to make a survey of the Kalis Overpass, under the pretense of wanting to turn it into another defended egress into Kalis. This is a decoy operation, meant to make the Autobots more paranoid with the greater access to the nearby sectors it would allow us, and occupy their attention.
- A fortified outpost within Kalis itself is a long term goal, from which maneuvers on seizing Praxus can be made. This will be approached at pace and cautiously to prevent the Autobots learning about the operation too soon. The most optimal location is being researched still, updates will be provided as necessary.

That is all for now. Glory to the Decepticon Empire! Field Commander Razorclaw, out.

Field Commander Razorclaw, reporting in. Due to its altitude and rugged terrain making the Northern Range difficult for aerial recon as it provides plenty of environmental concealment to terrestrial enemy operations, I took it upon myself to engage in patrolling out the region.

In doing so I encountered the Autobot Cavalier Hot Rod roaming about the crevasses. I capitalized on the opportunity to ambush him, and teach the young soldier why his kind should not wander the wilderness alone... but after a few brutally swift exchange of attacks he realized he was outmatched, and mayhaps more shockingly, had the common sense to withdraw while he still could under his own power. My own damage is minimal, though his cutting saw did put a few good gouges in my armor that will need to be resealed.

I am more concerned with why he was out here. Typical Sky Lynx patrols this region from above... and typically would be disinclined to ask for assistance unless there was something his size would not allow himself to attend to. That or they are still searching for alternates to bypass our blockades of their transport routes, knowing the mountains make aerial recon difficult.

I have dispatched Divebomb and Rampage to search for the Autobot or the reason he was here, but as I stated before, the mountain ranges are large in area and provide plenty of hiding places for our foes to exploit. Any assistance in covering the distance is optimal. Razorclaw, out.

Razorclaw is played by Swiftpaw.

"Patience is the companion of wisdom."

RAZORCLAW was once a professor at the Tyrest University, one of the primary institutions of knowledge and science on Cybertron. He was renowned for his patience, calm demeanor and unconventional thinking. Tyrest University was eventually destroyed and Razorclaw retreated into the Manganese Mountains with two of his surviving students, Divebomb and Rampage. There they hid from the Autobot forces while honing their hunting skills. In time, tales were told about hunters, known as the Predacons, who haunted the mountains. Despite having adopted violence, he remains patient with those who seek knowledge from him.