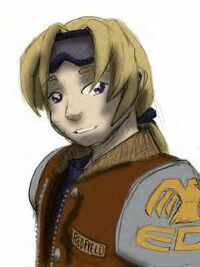 A skilled marksman, Raven is a talented street fighter hailing from a dangerous neighborhood in New York City. The younger of a set of twins, he joined the military at eighteen and was later recruited as a Joe, while his brother instead turned to Cobra, resulting in an internal struggle that he refuses to talk about. Bright and optimistic, he has a friendly, selfless nature and will go out of his way to help even complete strangers. He is fluent in French. On his person he tends to carry a Mark XIX Desert Eagle, with which he is very adept.

Raven's real name is Jayson Angel Redfield. He is a son of an American man, Alex, and a French woman, Melisande. His twin brother, Angelus (real name Zachery), is a member of Cobra, and Raven is determined to free him from the ways of terrorism. Both twins, born on April 19, 1987, are native to New York City, in a neighborhood where one could never be too careful. It's because of this that Raven is a skilled street fighter, having learned to defend himself from thugs. Aside from saving his brother, Raven is determined to keep Cobra from having their way.

After graduating high school and turning eighteen, Raven joined the military as a marksman, prior to being recruited as a Joe.

Raven is deployed as a sharpshooter for G.I. Joe.

The first Shattered Glass denizen ventures through the portal and encounters a group of Joes and Cobras.


The 'other' Slipstream has been successfully transported to Pendelton. He is being held in the infirmary.

The continuation of A Parting Gift

In the continuing adventures of Scarlett's broken heart, she goes after the man who she blames more than Snake-Eyes. (Radio Appearene Only)

TO: Joe Command
FROM: Raven

During a conversation with an Over Kill unit on IRC, I agreed to meet him in a bar in Las Vegas, Nevada. As it turns out, it was a meeting of "outcasts" like myself, and Over Kill attempted to recruit us all into "the Coil", which he seems to believe is Cobra. I, of course, declined, but I did pick up one of the brochures he offered us.

I had met this Over Kill previously, where I gave him an alias, but he didn't fall for it and asked for my real name, which I did not reveal to him.

Among those present at the gathering were Artemis, and two of the Joes from the 'other side'.

Aug 17 - Meeting of the Outcasts

Over Kill calls for a 'meeting of the outcasts' in a bar outside of Las Vegas.

The Quintessons, having learned the location of the Pit, launch an assault on Offutt Air Force Base. The Autobots send Grimlock and Snarl to assist in the counter-attack, and the Decepticons take the opportunity to perform research and reconnaissance.

Played by his creator.

Retrieved from "https://tfumux.fandom.com/wiki/Raven?oldid=64754"
Community content is available under CC-BY-SA unless otherwise noted.