This page is for the quiet, sneaky Decepticon Saboteur. For his more... "social" Shattered Glass counterpart, see Ravage (SG). 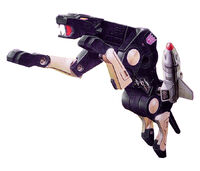 Ravage operates best when he operates alone. He's a creature of the night and carries out most of his murderous mischief at that time. Often the other Decepticons have no idea where he is, but they know he's up to no good, so they don't mind. He is easily the craftiest of his comrades and is quick to devise deadly new strategies to be used against the Autobots. He tends to remain aloof from the others, but his deeds command their respect. He is an exceptionally efficient war machine.

Ravage can hide his presence from others virtually completely. He can shield any electromagnetic radiation inside him from being detected by any monitoring devices. His walk is soundless. And he can disappear from sight in subdued light or shadows. He has his own monitoring devices in his nose module that give him a superior sense of smell, hearing and full-spectrum electromagnetic wave detection. He carries two low-radiation 1 megaton proton bombs, which he can fire over 3 miles distant or set in place with a timer.

He is very sensitive to light and can be blinded by too much of it.

One of the original team of Decepticons that accompanied Megatron on the attack of the Ark spacecraft, Ravage was reformatted by Teletraan I as an audiocassette to better blend in for operations based on Earth. Ravage served loyally as a Decepticon spy. He was one of the first Transformers to have been encountered by a human, as workers investigating a destroyed power station fell afoul of Ravage who pounced upon them and frightened them away.

Shortly thereafter, Ravage accompanied Soundwave on an infiltration mission to gather data from Teletraan I. Soundwave was discovered, and Ravage was captured in an energy net and held captive. The Decepticon spy figured into a disinformation plot hatched by the Autobots, who purposely leaked the presence of a rocket fuel depository in the outlying desert. In truth, there was no rocket base -- Autobot Hound projected a holographic illusion in the hopes of luring the Decepticons into a trap. The Autobots allowed Ravage to escape and report back to Megatron, who easily saw through the ruse.

During Megatron's gladiatorial match with Optimus Prime, Ravage was let out to watch his master battle their nemesis. Soundwave also petted him. This would be cute if it wasn't creepy.

During one of the Decepticons' many trips to South America, Ravage got to meet up with a real jaguar. Despite his resemblance, the non-robotic jaguar did not take kindly to Ravage's presence and engaged him in a "cat-fight." Ravage used his rocket boosters to scare away his living look-alike.

During Megatron's attempt to convince the humans that the Decepticons were good and the Autobots were evil, Ravage was dispatched to track down Spike Witwicky when the human searched for evidence that would exonerate the Autobots. Cornering the flesh creature in a studio control room, Ravage had a door closed on him, was electrocuted by a control panel, and had a shelf filled with video cassettes pushed onto him. To make Ravage feel better, Soundwave took Ravage along with the other cassettes to a teen dance party, where Ravage was a big hit with the ladies.

Some time later, Ravage, along with Starscream, Thrust, and Soundwave, was transported to a planet with massive inhabitants, along with a group of Autobots, in a space bridge accident. The first creature they encountered, Aron, thought the Decepticons were toys.

Ravage attempted to escape, but Aron's cat Nitro chased after Ravage like a mouse (how embarrassing). Aron put him with his pet hamster, Blooper, in his cage. Instead of immediately asserting his dominance by killing the beast, Ravage went and ran on the creature's exercise wheel. When captured by scientists, they attempted to dissect the Transformers, but Ravage was able to pick his locks and free the Decepticons, who hijacked the Autobots light beam to head back to Earth...and landed in a lake filled with alligators. That was a very bad day for Ravage.

Ravage stole the schematics and plans for the Weather Dominator from Destro, and gave those plans to Megatron.

It is commonly believe that Ravage existed as an independent operative before allying himself with Soundwave.

Soundwave and a few of his tapes attempt to steal Destro's plans for the Weather Dominator.

<The Decepticon spinny stays in place, but Ravage's speaking voice plays over the audio channel.>

"Report begins: Portal in southwestern United States now claimed by the terrorist organization called Cobra. While scanning the portal's energy output, I observed Autobot Lodestone in combat with human jet. <The spinny fades to show video footage of a Cobra Rattler dropping ordnance on Lodestone.> The Autobot outmatched the jet easily. Also present was human child Daniel Witwicky. <video transitions to footage of Daniel skidding over the dunes on his bike> Lodestone shielded him, <footage of Lodestone standing over Daniel, protecting him from jet shrapnel> but was sufficiently distracted by the battle that I was able to move in. Human agent of GI Joe <footage of Lady Jaye running toward the camera> intervened. I defended my catch, but Lodestone attacked me. <footage of the head of Lodestone's hammer at very close distance, then the camera shudders and appears to lift off into the air>. I was forced to abandon my catch. Data on portal and readings on all local entities available. <The Decepticon spinny returns.> Report ends."

Ravage stops by to inform Starscream of recent events.

An Autobot communications base being established in the Tagan Heights as a forward observation base was called in by Onslaught while on patrol. An infiltration attempt was made by myself under Onslaught's direction to see if the site could be disrupted or neutralized without an alert. Disruption disks for the mission were given.

Said infiltration mission was a failure and the site will be coming online far earlier than estimates. It is moderately garrisoned for the moment and is a makeshift facility that will be likely fortified further. The infiltration was not detected nor were the disks noticed before disengagement. It is possible by the point of this report that the base site will be operational. This must be taken into account i further operations in the area. I however do have a fairly thorough mapout of he layout, existant security, defenses, and sensor net though this will likely be compromised if the AUtobots expand it from a makeshift facility. I will defer to the regional commander as to how to best deal with the installation, though it's effect on operations in the sector will have to be alerted.

In the Apocalypse World alternative future, Ravage is dead, killed by Blaster.

Ravage was played by sydneygb from 2011 until 2015. In 2015 he was taken over by MightyShoxy, although he is still available for application.

Retrieved from "https://tfumux.fandom.com/wiki/Ravage?oldid=81278"
Community content is available under CC-BY-SA unless otherwise noted.