Ratchet is an evil Autobot "medic" from the "Shattered Glass" universe. 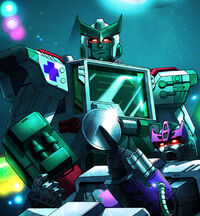 To say RATCHET is the Autobots' medic would be a falsehood. Ratchet is where Optimus Prime sends the wounded from battle, but not for repairs. No, they are sent there for punishment. Any Autobot ordered there has to be dragged kicking and screaming.

It's not that Ratchet wants to terrorize his patients. In fact, he honestly believes that he's doing them a great favor! Who wouldn't want some rusty old equipment replacing their head? That would look so cool! And he really doesn't understand why they get so upset after seeing the end result of his loving care. But Ratchet shrugs off their cries of protest and confusion. They'll come around eventually.

Mirage, a down-and-out bank robber volunteered for one of Ratchet's "upgrades" so he could gain the ability to turn invisible at will. Instead he wound up with permanent partial transparency. That was likely the last time anyone paid attention to Mirage.

After a harrowing Dinobot Hunt, Rodimus woke up on Ratchet's operating table, having lost a hand in a battle with Grimlock and the Decepticons. Rodimus, in a panic, immediately tried to leave, and objected to Ratchet's offer to add a second vocoder. It was then that Rodimus noticed that his hand had been not repaired, but replaced with a jagged sawblade. Ratchet was momentarily saddened by Rodimus's dissatisfaction with his "upgrade," but his grin of psychotic amusement returned quickly enough.

Blurr was morbidly fascinated with speculating on what was likely to happen to Wheeljack after Prime ordered that Ratchet should oversee Wheeljack's Earth-mode refit. Wheeljack, however, escaped before Ratchet could get his claws on him.

Ratchet is currently Chief Medical Officer of the Cybertron-based Autobots, and head of the Autobot Medical division.

Ratchet is currently Chief Medical Officer of the Cybertron-based Autobots, and head of the Autobot Medical division.

Ratchet was temped by Sgt. Slaughter for the Shattered Glass TP until January of 2010.

Retrieved from "https://tfumux.fandom.com/wiki/Ratchet_(SG)?oldid=60403"
Community content is available under CC-BY-SA unless otherwise noted.