View source
watch 01:25
Jurassic World: Dominion Dominates Fandom Wikis - The Loop
Do you like this video?
Play Sound
The name or term Ratchet refers to more than one character or idea. For a list of other meanings, see Ratchet (disambiguation). 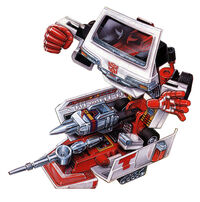 RATCHET was known as the best tool-and-die man on Cybertron. He can fashion anything from a pin to a cruise-missile and repair most of the Autobots and their specific parts, given the right materials. His rough language and manners belie his gentle touch on the operating-assembly table. He knows how to have a good time despite his involvement in a combat group. He gives a lot more backtalk to his commanders than the other Autobots, but does his job as well as anyone. Ratchet has an assortment of laser scalpels, arc-welders, electron microscopes, electrical circuit sensors and fluid dispensers at his disposal. His preference for partying to anything else sometimes interferes with getting his job done. In Toyota Onebox ambulance mode, Ratchet is equipped to handle both human and Transformer emergencies, although his patient-care compartment has limited space for other Autobots. For this reason, it can open to a Mobile Autobot Repair Bay, although it trades speed for greater transport space.

The broad, stout form of the Autobots' CMO, Ratchet. His face is darkly chromed, with gleaming silver optics, and a smart mouth always ready with a witty remark or snappy comeback. His shoulders are massive, used to bearing the heavy responsibility of keeping his friends and comrades alive. His white, armored chest is proudly graced with a centrally-placed Autobot logo. An invisible heads-up display allows him to compare stored medical data with the task at hand. His gold, red, and white legs are designed to provide the leverage needed in lifting heavy or unconscious patients. His chrome hips are lined with medical supplies, each one carefully arranged to be easily accessible in an emergency. His red and white hands are supple, and move with practiced grace and skill. Ratchet is perfectly designed to provide maximum healing in a variety of circumstances.

Before the war, Ratchet of Vaporex had a private practice as well as running a small clinic in Rodion.

Ratchetserved as chief medical officer of the Ark on its mission to seek out new energy sources to fuel the Autobot struggle against the Decepticons. When the Ark was boarded by the crew of the Nemesis, Ratchet attempted to defend his ship by attacking Soundwave, but was thrown into a computer console for his trouble. Ratchet and the other Transformers were forced into emergency stasis lock when the out-of-control Ark crashed into a volcano on a primitive planet.

Four million years later, the volcano erupted, activating Teletraan I to rebuild the Autobots and Decepticons. Ratchet was rebuilt into a human-scaled ambulance. After Hound and Cliffjumper's failed scouting mission ended in a counterattack by Laserbeak, Ratchet arrived with Hauler to pull the damaged Hound out of a ravine. Once he finished repairing Hound, Ratchet was part of the battlegroup sent to stop the Decepticons stealing the oil from an off-shore oil rig. However, he did not fare well in this battle.

After the Autobots saved their new human friends, Spike and Sparkplug Witwicky, from the oil rig fire, Ratchet repaired Huffer's damaged arm in the repair bay outside the Ark.

When Optimus Prime was caught in the explosion of the Ruby Crystal Mines of Burma, Ratchet helped the Autobot leader recover, but evidently his skills as a medic were not required, as Prime was fine after transforming back into robot mode. Soon afterwards, Ironhide was shot by Skywarp, so Ratchet carried the old-timer back to base for repairs.

During an ill-fated Autobot attempt to defend the local solar power plant, Starscream managed to shoot the guns out of Ratchet and Prowl's hands. Smarting from the concussion blast, Ratchet called for the Autobots to fall back. However, Ironhide once again managed to get himself damaged while saving Optimus Prime. Ironhide objected to Ratchet and Sparkplug's diagnosis of his damage, but Ratchet warned him against backtalk or the medic would short out Ironhide's mouth circuit. To prevent further argument, he shut down Ironhide, cutting off the warrior in mid-sentence. After the Autobots were led into a trap by a reprogrammed Bumblebee, Ratchet discovered the tampering done by the Decepticons and restored the little Autobot.

In addition to patching up his fellow warriors whenever someone (usually Megatron) had roughed them up a little, Ratchet was also in charge of helping whenever Wheeljack had another invention in the making. Working together, the two Autobots designed and built the Dinobots more or less from scratch — and did a pretty good job, considering they were working with substandard materials.

Ratchet was also responsible for saving Optimus Prime's life as the Autobot leader was critically wounded after being attacked by Starscream, Thundercracker, and Skywarp, Prime's most serious injury in the attack was a badly damaged cosmotron, a device that enables energy flow within a transformer. While a team of Autobots went on a daring raid to Cybertron to obtain a replacement part, Ratchet and Wheeljack managed to keep Optimus Prime's energy vitals stable. The doctor performed a daring surgery on the Autobot leader even while being subjected to attacks by Laserbeak.

When Skyfire refused to assassinate the Autobots and was gunned down by Starscream, it was Ratchet who reconstructed the giant Decepticon scientist and gave him the chance to reform.

In 1985, after Spike was injured during a battle with the Decepticons, Ratchet carried their injured human friend to the metro hospital. While Spike's mind was transferred into the Autobot X experimental body Sparkplug had made earlier, Ratchet repaired the battle-damaged Bumblebee, but was forced to cut short his repairs after Spike went on a rampage in his new body. After Spike's mind was returned to his real body, Ratchet theorised that he could probably fix the problems in the mind-transfer process, but thought it was better left alone.

When Megatron captured Gears and unwittingly threatened the destruction of the Earth with his Solar Needle, Ratchet totally fly-kicked Thundercracker. After the Decepticons retreated, Ratchet and Wheeljack argued over which wire they had to disconnect to stabilize the Sun.

Ratchet is Chief Medical Officer of the Earth-based Autobots, and head of the Autobot Medical division. In the spare moments he has between repairing injured Autobots, he has began to trainFirst Aid for the position of Medical Officer (to be the official Autobot doctor if Ratchet is called away to Cybertron). As a result, he is also training Spike to be a Level-5 medic (the equivalant of a doctor on Cybertron), which is First Aid's current position.

Ratchet spent 2011 operating out of the Ark, which had been turned into a mobile search and rescue base due to world-wide flooding. With Spike busy coordinating Autobot efforts with Destro and G.I. Joe, and the Weatherbots on Shattered Glass Cybertron, Ratchet turned to technophobe Buster Witwicky of all people to help with supply distribution, which has turned out surprisingly well.

In 2017, Ratchet helped move injured Autobots out of harm's way in Iacon during an assault by Trypticon.

In 2020, Starlock, with the help of Solus Prime, Ratchet replaced the hands that Nightbird had stolen in an earlier attack.

Many years after the Ark had crashed on Earth, the human terrorist organization Cobra discovered it and its dormant crew. The Transformers were reprogrammed to be under Cobra's control and given new alternate modes, with Ironhide and Ratchet now turning into HISS tanks.

Many years after the Ark had crashed on Earth, G.I. Joe discovered it and its dormant crew. The Transformers were repaired and given new alternate modes, with Ironhide, Prowl, and Ratchet now turning into G.I. Joe Hammers.

Rachet is currently Chief Medical Officer in charge of the Autobot Medical division.

Main-Universe Ratchet is temped by Bzero as if March of 2019.