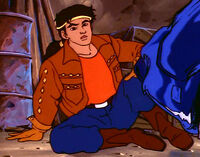 RAOUL is a professional music producer. He works for an independent label, and tries especially to promote Hispanic and Latin American bands. He is very good at what he does, but he tends to brag and drop names constantly. He talks a lot about the Autobots, to whom he attributes much of his success. He spends time every week working with inner-city children, trying to show them a way out of poverty and violence. He's fast on his feet, but has a mouth that is quick to get him in trouble. Raoul reacts to everything with an overconfident, almost sarcastic charm, sure of his ability to get himself out of any situation he gets into.

Raoul Mejía (born April 16, 1970), better known as simply Raoul, is a Latin break-dancer and singer who later became a recording industry executive. Born in Guayaquil, Ecuador, he and his family moved to New York City, New York, when he was 12 years old.

Based in New York, Raoul became known for his bandanna, mullet-ponytail, rhinestone-studded leather jacket, and heart of gold. He has been known to modestly refer to himself as "The Latin Michael Jackson".

Raoul mistook Tracks for an ordinary car that he attempted to steal, but then helped Tracks thwart a Decepticon plot to invade New York City using remote control vehicles. Notably, he managed to take out Megatron with a can of spray-paint.

Raoul would run across Tracks and the Decepticons again, when he and his posse, the "Bop Crew", ended up in the middle of a Decepticon scheme that sought to brainwash humans into building... something... using the totally awesome tunes played in the nightclub Dancitron. (Those tunes being "Cold Slither" and big band music, because the Charleston was totally all the rage in the 80s.)

Tracks and Raoul reached the club, only to be attacked by both hypnotised humans and the two Decepticons. Raoul quickly discovered the cure for the hypnotizing effects — water — and tripped the sprinkler systems.

Following the Decepticon defeat, the Bop Crew requested the use of Blaster to replace their lost boombox.

After years of helping run Sparkplug's garage in New York (which, in turn, was a secret Autobot base), Raoul is now an A&R executive at Starlight Music, devoting his time to helping talented inner-city youths find ways out of gang life through dance and music.

In 2019, Raoul was informed by Spike Witwicky about Tracks' death at the hands of the Fallen.

Interaction With Other Autobot Human Allies

Perhaps from his appearances on talk shows and public speaking engagements, Sparkplug was able to piece together enough money to briefly run a garage. That garage was used as a cover for the Autobots, and it was also used to repair nearly 300 stolen cars that the Decepticons used to create a drone army. Tracks suggested Raoul help repair the damaged cars as a way to atone for his previous "unauthorized car borrowing."

While working off his debt in the garage, Sparkplug amicably worked with Raoul, teaching him some mechanical pointers. Sparkplug took a liking to Raoul, as his army life showed him people could rise above almost any rough spots in their lives. So much to that Sparkplug overlooked Raoul's early "car borrowing" and street hustling escapades. Sparkplug just had 3 simple rules for when Raoul was working in his garage: stay away from his son, do not talk to his son, and if Spike happened to say anything to Raoul while Sparkplug wasn't there, tell him to "buzz off." Obey those three rules, and everything else will be smooth sailing.

Raoul is available for application. In the meantime, he's being temped by BZero.