View source
The name or term Ransack refers to more than one character or idea. For a list of other meanings, see Ransack (disambiguation).

Ransack is a Decepticon Insecticon. 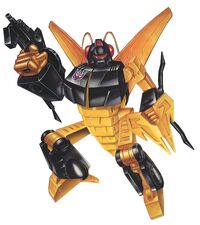 With a fury unchecked by concern for the safety of innocents, Ransack enters into a battle like a howling tornado. If necessary, he will level an entire town to hunt down an enemy. The destruction and misery he leaves in his wake only serve to spur his manic cravings for more. Truly, he is one Insecticon whose mechanical heart is as cold as his metal hide. Among his fellow Decepticons he is known as a tough-talking, straight-to-the-point soldier who is always looking forward to the next conflagration. His comrades have the utmost confidence in his abilities to wage war -- but they know enough to let him lead the way since Ransack won't take the time to shoot around them.

Ransack can operate at normal size or shrink down to insect size when he's in his locust mode. His abilities are the same either way except he can leap 200 feet at insect size and 1.5 miles at normal size. A kick from his rear legs packs enough power to knock over a bulldozer and shatter a foot-thick steel vault. The vibrations produced by rubbing these legs against his tail assembly can crumble a brick wall. His antennae can shoot 80 Kilovolt electrical charges. In robot mode he carries a high-intensity concussion blaster gun. Each of his arms has two razor-sharp talons mounted on it which he can spin at 300 rpm and use as a buzzsaw.

Ransack's rear legs are susceptible to complete mechanical failure if any foreign matter gets into their joints.

Ransack and the Deluxe Insecticons remained on Cybertron during the Lost Years, and didn't transfer to Earth until 1985. Ransack reports to Venom first, and to Shrapnel only in emergencies.

While most of the Deluxe Insecticons remain active on Earth under the command of Venom, Ransack himself is incarcerated in Garrus-9.

Ransack is available for application.