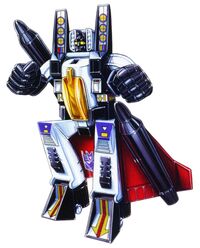 RAMJET is the consummate team player. He enjoys working closely with his brothers Dirge and Thrust to protect Cybertron’s skies from Autobot invaders. More of a spy plane than a fighter, Ramjet monitors troop movements and then alerts others when and where to attack. As he often says, “The skies are my castle, and I protect those that enter my domain.”

In Lockheed SR-71 "Blackbird" mode, Ramjet is an advanced, long-range, Mach 3+ strategic reconnaissance aircraft. During missions Ramjet operates at high speeds and altitudes, collecting imagery, signals, measurement and signature intelligence. He has a pair of sharp edges leading aft from either side of his nose along the fuselage. Lightly armed, Ramjet can, if necessary, ram an opponent, often slicing right through it at extremely high speeds. The rest of his form is not quite as durable, and he relies on speed to outrace most threats. If a surface-to-air missile launch is detected, Ramjet’s standard evasive action is to simply accelerate and outrun the missile - he can easily go as fast as Mach 3.3. In robot mode, Ramjet is slower but better armed, carrying two cluster bomb missile launchers and two laser beam rifles.

While Ramjet realizes solo recon missions are important, it pains his to be away from his brothers and the other Decepticons for long periods of time. This can sometimes depress him and limit his effectively. Also, his engines are inefficient when forced to fly at slower speeds to allow other Decepticons to keep up with him.

Ramjet served Deathsaurus on Cybertron since the beginning of the war as a member of the Colonel's Mayhem Suppression Squad. Tricked into believing that Alpha Trion truly wanted to bring peace between the Autobots and Decepticons, Ramjet and his brothers received secret upgrades from the Old One, and pledged their loyalty to him and his goals. While less convinced of Trion's trustworthiness than his brothers, Ramjet is willing to go along with the majority in the interest of family unity.

Ramjet remains one of Starscream's Seekers. Although currently assigned to Cybertron, he can be called back to Earth whenever needed.

Ramjet is currently between players, even tho he's awesome. App for him! =)

In the Shattered Glass universe, Ramjet is a noble knight, fighting for the side of good and right!