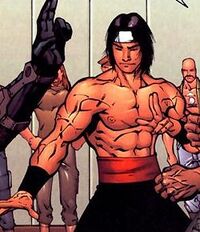 "Get into a fortified villa with twelve-foot-high walls topped with razor spiral and guarded by dozens of Cobra guards armed to the teeth? Easy. Now give me something really challenging to do."

Quick Kick had his odds stacked against him from birth. He found difficulty being accepted by either the Japanese or Korean community because of his mixed blood. He would have had a passion for basketball if only he wasn't being turned down for his height. However, there was one thing he found out he could be good at. With his can-do attitude, Quick Kick excelled in many martial arts forms. He has earned black belts in many of them that you will find it hard to track of which ones he has yet to fully master. He is a top contender in Tae Kwon Do, Go Ju Ryo, Southern Praying Mantis Kung-Fu, Tai-Chi Sword, Zen Sword and Wing-Chun fighting arts.

There are few places where mastery of the martial arts is prized. Hollywood is one of them. With his resumé, Quick Kick easily found work as a stuntman. The US Army didn't fail to notice him, either. When he inquired about signing up, he was recruited on the spot. With his skills and that same can-do attitude that got him through life, it didn't take long to get him inducted into the G.I. Joe Team.

Quick Kick was born to a Japanese father and a Korean mother who owned a grocery store in the Watts district of Los Angeles. As a child, he found it difficult to be accepted by either the Japanese or the Koreans because of his mixed heritage. To help defend himself, and since he was too short to play basketball, Quick Kick turned to the martial arts and became skilled in many of them. He gained black belts in Tae Kwan Do, Go Ju Ryo, Southern Praying Mantis Kung-Fu, Tai-Chi Sword, Zen Sword and Wing-Chun. He eventually put those skills to use in Hollywood, where he worked as a stunt man in a number of films. On one movie set, Quick Kick caught the eye of an Army colonel working as a consultant. He suggested Quick Kick could put his skills to better use in the Army, and he enlisted shortly after.

After enlistment, Quick Kick was noticed and recruited by the G.I. Joe team. Just after Quick Kick's arrival at the Pit at Fort Wadsworth, he and fellow newcomer Alpine were assigned to a rescue mission to Cobra Island. Another Joe, Ripcord, had parachuted onto the island, and was now missing. Unofficially, Hawk also wanted the rescue team to double as a recon team to take photos and observe Cobra's activity on the newly-sovereign island. Quick Kick snapped photos of Cobra aircraft and their prototype Terror-Drome launch base after the Joes climbed the island's volcano. After a fight with Cobra troops, the rescue team retrieved Ripcord, or so they thought. In reality it was a wounded Zartan posing as Ripcord. When the truth was revealed, Quick Kick helped stop Zartan as he ran amuck in the Pit. He was later one of the many Joes who took part in the invasion of the Cobra-controlled town of Springfield. Shortly after that battle, Quick Kick and other Joes were training in the Pit when Storm Shadow infiltrated the base looking for Snake-Eyes. When he was confronted by Quick Kick, the ninja defated him, noting, "You have speed, strength and skill but your weakness is the compassion at the core of your warrior's heart."

During the G.I. Joe teams attack on Cobra held Springfield, he joined the Assault Team lead by Stalker, towards the end of the battle the team attempted to assault the Airport, to prevent futher evacuation of Cobra personnel. During the assault, Quick-Kick killed a Viper, this Viper was the Father of a teenaged girl, who would later become a Cobra Sniper, with revenge issues.

A disastrous mission into Eastern Europe led to the toughest five months of Quick Kick's life. Along with Stalker, Snow Job and Outback, Quick Kick travelled to the Soviet bloc country of Borovia. The mission was top secret and they were told that the state department would disavow all knowledge of their mission if they were captured. A series of events led the Joes to be captured, with only Outback escaping into the sewers of Borovia. He had been ordered to get out of the country and ask for help. Stalker stayed behind since Snow Job and Quick Kick were injured, and they were his responsibility. The government did in fact disavow all knowledge and the three Joes were thrown into a Borovian gulag for five months. Quick Kick may have died in that prison if not for an illegal rescue mission led by Snake-Eyes, Scarlett and Storm Shadow. When the Joes returned home, Outback felt guilty for leaving the others in Borovia. Quick Kick and Snow Job told Outback his job was to get out and tell everyone back home what had happened, and he did what was right. Some time later, Stalker, Quick Kick and Outback went on vacation to Mexico where they ended up fighting a group of terrorists who hijacked a tour bus.

A few years later, Quick Kick was part of a mission sent into the middle eastern country of Trucial Abysmia. It was to be his last. The plan was to perform a hit-and-run mission to destroy Cobra Terror-Drome bases in the desert of Trucial Abysmia. The operation started out being fairly easy. But, the group was ill-prepared for the large contingent of Cobra's military who were in the area. Many of the team members were wounded, and the Joes were forced to surrender. The captured Joes were held for a short time, and then a Cobra S.A.W. Viper mercilessly gunned down a number of them. Quick Kick was among the survivors who escaped in a captured Cobra vehicle. They were tracked down, however, and the vehicle was fired upon and exploded. Quick Kick and several others were killed in the blast. Only Duke, Falcon and Cross Country survived. Quick Kick and his teammates were given an "open boot" ceremony in the desert. By the end of the Joes' war in the middle east, fifteen Joes had lost their lives. Quick Kick and the other Joes killed in action were buried in Arlington National Cemetery. Years later, Quick Kick's name was added to a new memorial honoring the fallen members of the G.I. Joe team.

Quick Kick died before the MUX started, so unless Dr. Mindbender clones him, he probably won't be showing up.

Quick Kick is dead, and therefore unavailable for application.