Transformers Universe MUX
Register
Don't have an account?
Sign In
Advertisement
in: US Army, Article stubs, Dead,
and 3 more 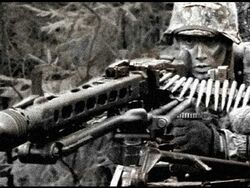 David "Pug" Brewi was born in 1930 in Bayshore, New York. Heading to the big city as a teen, he took up boxing, and worked his way up to Golden Gloves champion. Joining the Army at the start of WWII, he became a heavy weapons specialist, training himself on the latest combat technology and served as a paratrooper in the 101st Airborne Division from 1945 to 1947. During that time, Pug was chosen to join a team led by Sgt. Savage. After the war, he earned a bachelor's degree in the early 1950s at the Newark College of Engineering in New Jersey and attended Arizona State University, where he played football as a running back. By 1954, he was a professional football player for the Baltimore Colts. Upon retiring from football, Pug became a heating, ventilation and air-conditioning contractor.

Based on "D-Day" from the original Screaming Eagles, but adjusted for the pre-D-Day WWII era.