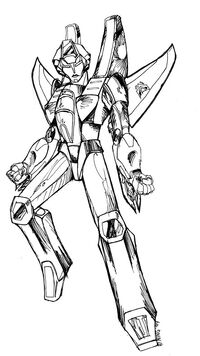 Puddlejumper isn't the smartest of Decepticons, nor is she the most durable. But what she is, is a reliable little courier. Even if she's slow among her fellow seekers, she puts her all into completing her deliveries. Though combat... well, she's not terribly good in combat. She's vulnerable when flying unescorted. Possibly weakest of Seekers at this point. She's highly loyal and tries to be brave, though!

This mighty Seeker jet... well, isn't mighty, is barely a Seeker if it is, and, well, isn't a jet. It's a Piper Cub. It has Decepticon insignias on the wings, and her fuselage is canary yellow. It has a single rotor on the front, with a piston engine visible behind it. The wings have little supports attaching to the bottom of the plane, as well as the basic attachment to the top.

Puddlejumper ran into Turborat soon after his arrival on Earth. In 2013, all Earth-assigned Seekers were brought to Cybertron to help defend Polyhex.

This character is played by her OOC creator.

Note: PUDDLEJUMPER is one of the smartest, toughest Decepticons there are. Lightning fast, she's a great asset in combat, except when she takes off on her own on a personal grudge-fight - she's not very reliable when it comes to staying on mission. More concerned with fighting Autobots than the Decepticons' lofty goals, she often gets in trouble with her superiors with her slack attitude towards military discipline. Preferring to work alone, she relies on her skills as a warrior to get her through. While not particularly loyal to Megatron or Cyclonus, wherever there's a fight, she'll be there.

In 2013, Puddlejumper encountered Captain-Mal in Kaon, who fired on her immediately. She returned fire, successfully driving him off.