This page is for the heroic (if somewhat dickish) Autobot strategist. For his evil Shattered Glass counterpart, see Prowl (SG). 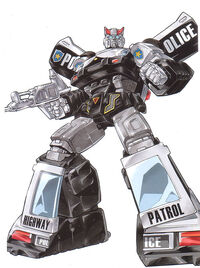 He is quiet, competent, and very loyal, but perhaps his most valuable trait is his almost endless patience. Once Prowl is assigned a task, he will keep at it until it is accomplished. He works with proven facts, not imagination or guesses. If he has any doubts, he will radio Optimus Prime, his commander, before proceeding. He hates doubts in any form, and he strives to make everything he encounters reasonable and logical. He believes it only when he can explain it. On a personal level he is friendly, but not too sociable. He's a listener, not a talker, unless someone says something unreasonable. Then he will demand an explanation.

Prowl has the most sophisticated logic center of all the Autobots, giving him the ability to analyze any combat situation almost instantaneously and then advise on the optimal course of action. For example, Prowl can observe 800 moving objects, compute their probable paths of movement, and determine the proper countermove in .05 seconds. From his shoulder cannons he can shoot wire-guided incendiary missiles that reach temperatures of 12,000 degrees Centigrade upon explosion. He also carries a semi-automatic rifle that shoots pellets filled with a highly corrosive acid. Its range is 300 yards.

His dedication to logic and reason makes Prowl particularly vulnerable to the unexpected. Irrational and inexplicable situations can really scramble his circuits, sometimes to the point of total shutdown of his mechano-cortex center, leaving him temporarily dysfunctional.

Prowl was part of the crew of the Ark, the Autobot starship that left Cybertron looking for alternate sources of energy only to crashland on Earth. Four million years later, the Transformers were reawakened by the eruption of the volcano the Ark had crashed in and reformatted by Teletraan I. Despite being situated in the United States, Prowl was reformatted as a Japanese police car. No one seemed to notice.

On Earth, Prowl continued to serve as Optimus Prime's right hand man, filling the role of military advisor and strategist. His precision thinking and by-the-books planning served as a valuable counterpoint to Jazz's more improvisational style, and it was up to Optimus Prime to weigh their views and come to a decision. During an attack against the Decepticons, Prowl's battle computer was knocked offline by a particularly fierce blow. Crippled, Prowl extended his antenna to seek out an online computer that he could patch into. He found Chip Chase's desktop terminal, and the young human ally momentarily took control of Prowl, animating the Autobot warrior with his computer. Chip and Prowl handily defeated the Decepticons, and the Autobot remarked that Chip was a human after his own central processor.

After the Dinobots moved to a mysterious prehistoric island, time portals began opening all over North America. Prowl, Inferno and Jazz were sent to deal with a portal from the wild west. Prowl defeated the cattle rustlers by melting their guns with his acid pellets.

Skids and Prowl attempted to stop the mayhem caused by Blitzwing's Decepticons, but instead the two Autobots crashed into each other and were temporarily rebuilt into a throne by Scrapper. After the Decepticons were driven off, Prowl and the others reformed the throne for Prime, but their leader declined the offer.

Prowl is head of the Autobot Infantry division. He was in command of the Ark as it traveled the Earth saving humans from the planet-wide flood on 2011.

In 2013, Prowl was moved to the general command pool to assist running all Autobot operations while Optimus Prime was offworld. Chromia was promoted to full commanding officer of Infantry, and named Roadbuster her XO. Later that year, Prowl ordered the roughing up of Autobot prisoner Buzzsaw, to the shock and resentment of the other Autobots.

In May of 2015, Prowl was injured in an explosion in Autobot City that was blamed on Autobot Jetfire. Prowl has since recovered.

Prowl is former head of the Autobot Infantry Division. He has since been moved to the main Command pool and assigned to provide overall Autobot strategy.