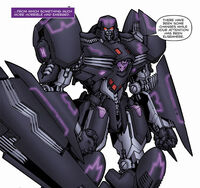 In 2022, Primus Pilus came through a warp gate and attacked G.I. Joes over Nebulos, before re-entering the warp gate and emerging once more over Earth. Once there, he damaged the Delta station and nearly killed Marissa Faireborn in the process.

Primus Pilus later showed up at the Cybertron peace negotiations, disrupting the event and claiming to be Megatron. He then took over Kolkular and called others to join him.

The black and purple features of Primus Pilus appears on the screen. “My Decepticons. I have returned to Cybertron after having been gone only a very short time to find a peace conference, one which I would have never approved of, being held and Starscream giving Optimus Prime first choice of... concessions. This is not something I, or you should stand for. There will be peace. But only when Optimus Prime and his Autobots submit to our authority. Cybertron is ours and ours alone. We do not need to share it with anyone. We are Decepticons. Cybertron is ours to rule.

I see your doubts as to who I am upon my return. Know that I am Megatron, leader of the true Decepticons. Those that choose to follow me. I am in Kaon, as I should be at the place where it all began. Those who will not take a knee and let Optimus Prime dictate how to divide /our/ empire, are free to join me. Those that do not will be... handled appropriately. Doubters may see me in person.

As for my regent, Starscream. You have 48 groons to abdicate the throne. Since you have more or less done what you can to keep the empire from falling to complete shambles, I will give you this chance to return things to status quo. Know that my mercy is limited to this. After that, I will be retaking my throne by force.

May 15 - Optimus Prime has fallen

The image of Primus Pilus appears on the screen, surrounded by the fires of battle - of the potential fall of Stanix. "Decepticons. Optimus Prime fell by my hands tonight, and currently Ghost is in possession of the Matrix. If she returns it to me, then all shall be fine. She will be safe. As for Stanix... (A wicked half smile appears on his face) Thunderwatch betrayed us this evening. And Stanix will fall. Feel free to participate in the burning and plunder of the city. Its fate is on his hands. None will defy the Decepticon cause. DECEPTICONS FOREVER.

Pilus's craggy and -grinning- visage comes across the screen. The Emperor and Warlord looks inordinately pleased with himself, despite sporting signs of a recent fight.

--Command Lock (Division XO and up, but only the known 'loyal' Decepticon command by and by)--

Ghost was the last one visibly reported as having the Autobots' Matrix of Leadership. Find her, bring her in. If not possible, the Matrix itself will suffice.

His grinning sneer is the last thing seen on the screen before it fades into the Imperial insignia.

Decepticons. Nothing goes in or out of Vos without my permission. If they try to flee, shoot them down and drag them to the prisons. If they come to surrender, take their weapons, imprison them until further notice. We will end this with as little violence as possible. They -are- Decepticons. They are misled and believing in the silver tonged words of a known traitor and liar, promising them the stars without explaining the costs. And one that would bow to Optimus and the -Autobots- to get what /he/ wants, at the expense of others. Thundercracker and Razorclaw are to be repaired and placed into cells until they can be spoken to by command.