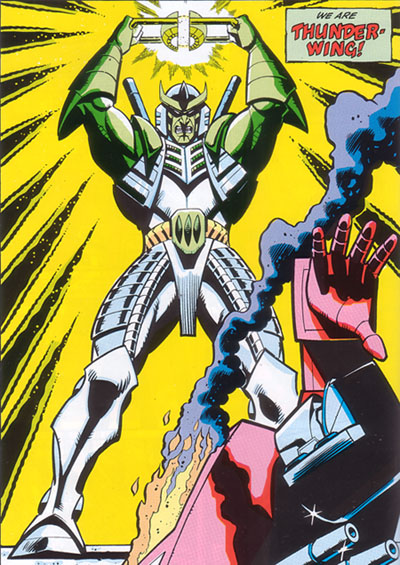 On top of its experimental uses, a shell can also function as powerful battle armor, and aid in self-repair. The major drawback of the technology is that the core robot will feel whatever pain is inflicted on the shell, sometimes even more strongly than pain inflicted on the robot itself due to the shell's organic nature.

Currently the only Transformer in possession of Pretender technology is Thunderwing, who created the Pretender process.

Humanity performs a very simplistic form of cybernetics and merging it with their organic physiology -- artificial hearts and lungs were merely the first steps. There are cameras being used as replacement eyes, prosthetic replacement limbs, and far more. Cobra has several individuals that have had such procedures performed upon them. We've even seen more 'advanced' methods of this -- there is a Robo-Joe that works with GI Joe, for example.

Thunderwing was a scientist with very few peers back in the day. However, he held the view that there should be a fusion of the technological and the organic, much like what has been described above: bioneural circuitry being one example. Thunderwing desired to take it to another level entirely: replace the fully mechanical bodies Transformers currently possess with techno-organic hybrid bodies, which he felt would open new avenues of transformation capabilities.

While some of his theories are admittedly intriguing, especially in energon conservation that would result from such a wide-scale shift, there was a belief that such a hybrid form was unnatural, and further that it would lessen us. Thunderwing was ordered to cease and desist, but instead went rogue and continued his research. He was working on a "Pretender" process that would serve as the first step -- a techno-organic exo-armor shell in which our fully mechanical bodies could be stored -- and it was believed that when his laboratory was destroyed that he and his work were lost.