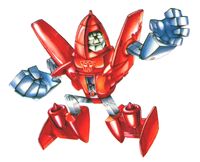 "To stop me, you have to catch me first."

Powerglide, unlike most Autobots, can fly under his own power, and it goes straight to his pointy head. Give him any excuse and awaa-aa-aay he goes, dashing off into the stratosphere at 500 mph -- but not in a straight line. No, Powerglide is an aerial acrobat, able to perform stunts other Transformer planes would never dream of. Barrel rolls, tail stands, death spirals, screaming 3200-mph powerdives: none of these are too tough for this Autobot barnstormer, and if he has an audience, be they friendly or enemy, he is guaranteed to put on the air show of their lives.

Yet this seeming frivolity has saved his life countless times in combat. Powerglide is lightly armed with small concussion bombs and a nose-mounted thermal beam, and the former is practically useless in the air. Furthermore, his speed and power, impressive as they are, are vastly outclassed by most aerial Decepticons. Like the flying aces of World War I, Powerglide resorts to dogfighting maneuvers, using his flying skills to confuse and evade the enemy. This tactic works very well.

In fact, Powerglide's skill only aggravates his greatest weakness. He is good, and he knows it, and he misses no chance to show it. If this means he will seek out ever tougher foes to prove his mettle -- then he'll do that, even if it kills him. Some day, it might.

“And awaa-aa-aay we go!” — Powerglide, pretty much all the time

"Well, somebody's got to save the humans. It may as well be Powerglide."[1]

Powerglide arrived on Earth during the initial impact of the Ark into the planet. He had been present when the Ark crashed onto prehistoric Earth during the encounter wih the Nemesis, but due to being in the more heavily-damaged Ark belowdecks, he was not recovered and repaired for almost a year.

Powerglide was a brash barnstormer with a penchant for spouting gung-ho sayings like "And awaaa-aaa-aay we go!". He literally appeared out of nowhere to save Spike Witwicky when the boy had been thrown overboard Megatron's spaceship, after the latter's plan to use a clone of Optimus Prime to destroy the Autobots failed.

Bumblebee and Powerglide were sent on reconnaissance mission to investigate some strange energy readings out at sea. Inside the temporal anomaly, they discovered a prehistoric island inhabited by dinosaurs. Powerglide had to save Bumblebee from an aggressive pterodactyl then attempted to repair Bumblebee's damaged jetpack, before abandoning it and flying Bumblebee off the island. Later, after it was decided that the Dinobots should be relocated to the island, Powerglide led the large brutes and Spike to the island. After Spike unwittingly got himself into several dangerous situations, Powerglide flew him back home.

After Megatron demanded Optimus Prime's surrender in exchange for Elita One, Powerglide was among the Autobots who followed him to Cybertron. Once there, he was disbelieving of Starscream's claim that Optimus Prime had been destroyed. During their vengeful attack on the Decepticons, Powerglide met up with his girlfriend, Moonracer, who thought Powerglide was awesome.

Soon after hooking up with Moonracer, he was somewhat smitten with the fleshling female Astoria Carlton-Ritz after saving her from the Decepticons. They went on a date or two, but (fortunately) the only lasting result was a series of flashing lights under his chestplate in the form of a stylized heart. What purpose this served (other than being disturbing) is not immediately clear.

After thoroughly embarrassing himself by accidentally destroying several sets and props in an attempt to show off, Powerglide was among several egotistical Autobots who demanded to be given a role in a movie that Hoist was starring in. Initially, his "role" amounted to crashing into a STORE while in jet mode (supposedly to stop "the crooks"). Soon afterwards, Powerglide and the other would-be-actor Autobots asked Hoist to talk to the Director to get them some "real" acting roles. After reworking the movie into Attack of the Evil Alien Robots, the Director had the Autobots given cheesy alien face masks. Powerglide remarked that the role was "the pits", and that he would rather do the stunt crashes. In a later scene, Powerglide demonstrated his rather wooden acting "skills". Guess he was better suited for stunts.

In the Cobra-dominated universe, Powerglide was rebuilt into a Rattler.

In the Decepticon World universe, Powerglide died protecting Jetfire, so the Autobots could escape Cybertron for Nebulos.

In the G.I. Joe universe, Powerglide was rebuilt into a Tiger Rat.

Powerglide is available for application. He was temped for the Decepticon World TP by SpikeWitwicky. In 2014, he was temped by Bzero.