This page is for the heroic Shattered Glass Sweep. For his evil hunter/destroyer main-universe counterpart, see Plunder. 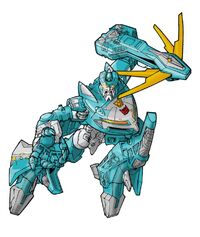 PLUNDER was forged by Unicron to serve as the Sweeps' Logistics Officer. While dedicated to the hunt, Plunder’s optics often stray to the valuables his prey may be carrying. Considered by his fellow Decepticons to be one of the more personable Sweeps, rumors persist of Plunder’s temper and ability to hold a grudge. Plunder was rumored to have been Unicron’s informant within the Sweeps. Plunder is slightly weaker than the rest of his fellow Sweeps and his lust for treasure leads Plunder into traps and fights he can’t win.

Plunder was created from the remains of an intrepid Decepticon squad that ventured deep into deep space and died in a mysterious accident. No one knows what they found, but Cyclonus, Plunder, Scourge, and Sunder returned instead, with no memory of what transpired.

Plunder travelled to Earth on the Nemesis, and later went planetside from orbit. He crossed over into the main TFU, but returned to the Shattered Glass universe before the northern rift was closed. Somehow acquiring a spacefold drive from the Junkions, he is the first Decepticon to return to Cybertron since it entered the Plait Expanse.