This page is for the evil hunter/destroyer Plunder. For his heroic Shattered Glass counterpart, see Plunder (SG). 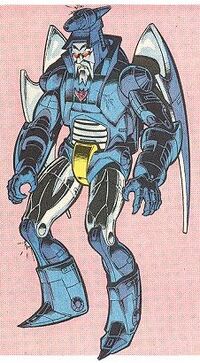 PLUNDER was forged by Unicron to serve as the Sweeps' Logistics Officer. While dedicated to the hunt, Plunder’s optics often stray to the valuables his prey may be carrying. Considered by his fellow Decepticons to be one of the more personable Sweeps, rumors persist of Plunder’s temper and ability to hold a grudge. Plunder was rumored to have been Unicron’s informant within the Sweeps. Plunder is slightly weaker than the rest of his fellow Sweeps and his lust for treasure leads Plunder into traps and fights he can’t win.

Plunder was created from the wreckage of an unfortunate Decepticon long-range patrol that ran afoul of Unicron. Sent to Earth, Plunder was originally subservient to the Chaos God, but since Unicron's destruction Plunder is a free agent. He has chosen to throw his lot in with the Decepticons, gleefully hunting down insurgents on the planet Cybertron.

After Windshear was infected with the Dweller virus, Plunder helped teach him how to deal with his new urges.

On the fourth of July, 2013, After being rigged with a tracker and repaired just enough to remain functional by Spike Witwicky, Jetfire, and Throttle, Nightlash was found by Decepticon forces in a comatose state. Assisted by Rainmaker, the sweeps Scourge and Plunder managed to get her stabilized and back safely to Trypticon. During the flight back, a tracking device belonging to the Autobots was found on Nightlash and destroyed.

I volunteer to clean out Starscream's Quarters, so whoever can move in. Glad to Serve M'Lord.

Plunder was created by his player and has been active since May of 2012. It is the first character for the player here.