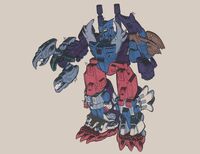 As the living incarnation of the six distinct and often feuding Seacon personalities, Piranacon might lead one to believe that his six-part mind must be confused and tormented. Quite the opposite is true. The bottom line on all Seacons is that they love what they do, and what they do best is hunt for prey. Piranacon is the truest expression of this lethal talent. From the moment the Seacons combine to form him, he is hunting for prey. When he finds and destroys one hapless victim, he immediately starts looking for another. He will continue this course of behavior until he runs out of fuel (which he inevitably will do since he never pauses to re-energize) or until he is stopped (which considering his awesome power, rarely happens). Usually, Seacon leader Snaptrap sets an internal timer in advance of combining with the other Seacons to insure that Piranacon will automatically disassemble into his component Seacons at some future time. Piranacon is so single-minded about his task that he would brush aside - if necessary, knock aside - anyone who tried to talk to him about anything else. More than a few of his comrades have had a few screws jarred loose (and worse) by merely asking Piranacon if he would like his joints lubed, or some equally innocent question. "I wish I had a thousand more like him," the Quintesson Military Commander once said with five smiles.

Piranacon's strength is immense. He can hold up to 4,000,000 tons, making him ideal for lifting freighters and various warships from the sea. He is fully operational up to a depth of 30,000 feet below sea level. He only walks at a maximum speed of 15 mph on land and 10 mph undersea, but since he is virtually impervious to weapons-fire, his need for speed in order to evade enemy attack is negligible. He wields a jawbreaker cannon (which is actually the weapons-base mode of the Seacon Overbite), which shoots powerful metal-eating, salt-based corrosives.

Piranacon has no known physical weaknesses. His one track mind often prevents him from accepting the advice and help of others, usually to his detriment. He jeopardizes his well-being by not attending to his own basic needs, such as refueling and removing rust spots.

The Seacons were deployed to Earth in 2013 from the Quintesson cruiser Bellum.

The Quintessons have expanded their territory from Hollywood down to Anaheim, and as far west as Santa Monica and Long Beach. There have even been reports of ships off the coast being sunk by Sharkticons. Piranacon sent a tidal wave into Los Angeles in response to an attack on the Bellum. Fortunately, there are still refugees hiding in the city, and an Autobot was able to drop supplies (and a GI Joe) into the city.

Later in August, the Seacons attacked the USS Flagg, destroying and sinking it, as well as an Autobot shuttle.

In 2015, the Seacons broke from the Quintessons, seeking their own destiny.

Piranacon is a TP character controlled by the six Seacon players.

In the Shattered Glass universe, God Neptune is a privateer and heroic defender of the seas.