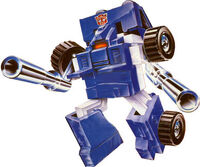 The more seemingly worthless a gadget, the more Pipes is fascinated by it. And he finds Earth a veritable gold mine of worthless gadgetry: carrot juicers, musical wristwatches, electric hair combers - the capacity of the human imagination never ceases to amaze Pipes! He is so enthralled by all this that he now collects these artifacts, creating a sort of mini-museum of American consumerism in an unused corner of the Ark. Pipes doesn't allow his hobby to interfere with his responsibilities to the Autobot struggle - at least not usually. Even while on a mission, he's been known to pull over to the curb and enviously ogle a human walking by using a hand-held, portable electric fan. Pipes explains, "The true collector never knows when or where he'll discover his next treasure."

In vehicle mode, Pipes can travel 100 mph, has a range of 400 miles and can haul up to 60 tons. His twin exhaust pipes, which become his arms in robot mode, emit corrosive gases that can dissolve a 2-inch thick slab of steel in 10 minutes. He is among the strongest of the Autobots.

Pipes is fairly tough, but even a mere scratch to his corrosion-resistant armor leaves him vulnerable to the destructive effects of his own exhaust gases. Often, in the heat of battle, Pipes is unaware of such blemishes and, consequently, sometimes succumbs to his own weapon.

Flattop, Outback, Pipes, Tailgate and Subsea all were cadets at the Autobot Military Academy.

Pipes was left on Cybertron during Optimus Prime's four-million-year-long sleep on Earth.

Pipes joined the Autobots on Earth in 1986. The endless warfare has left him a bit twitchy, and his focus on Earth gadgets help him retain his sanity.

Pipes remains a warrior on Earth, garrisonned on Autobot City.

In 2015 He was part of the crew on the ill-fated maiden voyage of the Spirit of Freedom.

Pipes was once played wonderfully by Dunmurderin, but is now available for application. He's now been @emitted by Zero and SpikeWitwicky, and his posts written by Bzero.

Left behind when the Ark launched, Wheeljack burned with anger at the lack of appreciation of his obvious genius. Desiring revenge, Wheeljack took his own ship, the Star Hammer, to Paradron to rescue Ultra Magnus, killing Pipes in the process. Upon Magnus's release, Wheeljack pledged to assist him in Magnus's own revenge schemes against Optimus Prime.