View source
watch 01:25
Jurassic World: Dominion Dominates Fandom Wikis - The Loop
Do you like this video?
Play Sound
This article is about the Autobot Air Guardian - for the city, see Phoenix, Arizona. 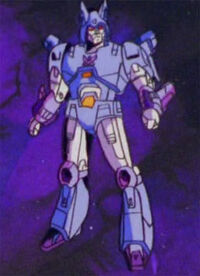 Reborn from the ashes more than once, PHOENIX guards the skies for his Autobot allies. No longer the Autobot soul imprisoned within a Unicronian shell, Phoenix nonetheless retains a similar appearance. His new altmode: the experimental F-37 Talon Stealth Fighter. The forward-swept switchblade wing design of the F-37 Talon allows Phoenix to attain hypersonic velocities exceeding Mach 5 in the atmosphere, as well as retain his original space-flight capabilities. The closest analogue the Autobots have to the medieval knight, Phoenix respects the law and order of his Autobot compatriots and human allies, but will not abide the subversion of his friends or allies from those who would oppress them. Weapons include variable-setting heavy-laser-rifle and energo-sword. Chivalrous and optimistic, Phoenix's only weakness is his compassion and concern for the well-being of the Autobots and their allies.

Phoenix originally began existence on Cybertron shortly after the outbreak of the Third Cybertronian War. His appearance was basically a fiery orange/red/yellow version of Cosmos. One of his quick claims to fame within the Autobot ranks, however, was how he could somehow manage to survive some of the worst catastrophes of the War and come out with nary a scratch.

After Unicron's arrival at Earth in 1997 and his subsequent apparent destruction, Phoenix met his match in Armada -- Cyclonus's twin. After Phoenix managed to upset several of Armada's plans, the Unicronian decided to take matters into his own hands and personally deal with Phoenix once and for all.

During a routine shuttle flight to Earth, where Phoenix was being reassigned due to volunteered transfer, Armada saw his chance. Destroying the shuttle, Armada proceeded to engage Phoenix in close-quarters combat. But as they fought, a temporal shockwave set off by the malfunction of a phase-cloak generator washed over the pair, blinding them both...

Phoenix suddenly awoke, looking around for Armada, who had apparently vanished. Only after a few minutes had passed did he realize that something was different, and he looked at himself.

He had been fused with Armada. Royal purple with fiery-hued orange, red and yellow... and an Autobot sigil.

Phoenix had been reborn from the ashes.

Since Phoenix finally arrived on Earth -- nearly 18 months after his transfiguration -- his concerns over the reception of the Autobots to the arrival of an Unicronian Autobot have proven to be unnecessary. The Autobots have accepted him as one of their own, and they have learned -- most likely to their relief -- that Phoenix is willing to stand up and defend both his Autobot compatriots and their allies.

This is not to say that Phoenix has not had difficulties. Cranial damage sustained during one conflict brought to light the unsettling news that Armada's consciousness was also contained within Phoenix's new body, and that there seemed to be a war of souls between the pair. Ultimately Phoenix retained his sensibilities, but Armada was always in the back of his mind, waiting for the chance to emerge.

That opportunity came when the Primus-constructed guardian known as Luminous attacked Phoenix, forcibly ripping his laser-core from the Unicronian body and then retreating. However, by that point Armada had begun to see how strong Phoenix truly was -- strength was, indeed, more than physical. Armada and Phoenix's consciousnesses merged, and soon thereafter, Phoenix was reborn yet again, this time with a new form -- a next-generation hypersonic stealth fighter prototype.

Phoenix can still fly in his robot mode. Even after he was rebuilt in the wake of his near-death at the hands of Luminous, he till had flight systems integrated into his robot mode.

Phoenix was created and is played by Darksabrz.