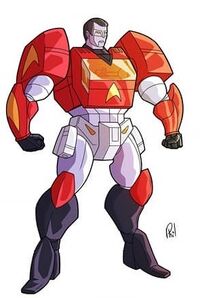 PHASE-AR is the ultimate Trekkie. Having watched every Star Trek TV show and movie made by man, he has incorporated various characters and concepts from it into his own personality to such a degree that he looks upon the world through the eyes of Star Trek. Following that philosophy, he's become quite the explorer with an insatiable curiosity to seek out new life and experiences. In robot mode, he carries weapons he has fashioned himself to resemble Star Trek weapons. These include a 24th century Federation phaser rifle, a custom launcher that fires miniature photon torpedoes, and a Klingon Bat'Leth for getting up close and personal. He transforms into a Federation Type 6 Shuttlecraft from the Next Generation TV series, equipped with impulse and warp drive that allows him to fulfill his own curiosities.

A large robotic version of a Starfleet officer from the 23rd Century, at least at first glance, standing at about 20 feet tall. Closer observation shows that Phase-Ar has fashioned himself after one, coloring his body plates to be black from his feet up to his waist, and his chest, arm, and back plates are painted in a gold color. On the left breast plate he's fashioned the emblem of USS Enterprise's command division. Against his back however are hints of his alternate mode, with a pair of warp nacelles compacted and folded up against his back like a backpack. His head, however, is a typical gray coloration of most Transformers, except he's added 'beard' components around his mouth components and around his head, as well as cranial ridges on his forehead. Sharp facial features surrounding the blue optics gives the impression one is looking at a typical Klingon. Attached in brackets on his back are three obvious weapons: A Federation phaser rifle styled after 24th Century models, a projectile launcher, and a well polished Klingon Bat'Leth, complete with leather wrapped around the 'handles' on its non-sharpened edge.

A Federation Type 6 Shuttlecraft from Star Trek: The Next Generation. Measuring about 20 feet long by 15 feet high, it has a boxy shape in the rear, with the front being swept downward in a wedge shape with a darkened glass windshield. Attached along the bottom edges of the shuttle are two warp nacelles, with thin windows along the sides that glow electric blue when the shuttle is in operation. On the rear of the shuttle craft is a large door that can open and form a ramp into the interior. On the top rear edges, a pair of impulse engines are mounted, giving the rear section a widened appearance. On the sides of these a number is painted: 1701-D. On either side of the forward section are a pair of darked glass side windows, and below them a name has been painted in black letters: GALILEO. Right behind these letters is the Starfleet emblem turned on its side with the tip facing forward, and behind this a pair of red stripes that run straight back towards the rear. In the middle of the shuttle, U.S.S. ENTERPRISE is written inside the stripes. On the nose below the windshield is another number: NCC 1701-D. This one appears to have a custom modification with a port underneath the nose, set back a bit but leaving enough clearance for the shuttle to land on top of the warp nacelles. Along the sides of the nose under the red strips are a pair of type 4 phasers.

Before the planet of Junk started receiving television signals from Earth, Phase-Ar was originally known as Torix. One of the planet’s best minds, he enjoyed taking the trash that was deposited daily on their world and seeing what he could build out of it. Vehicles, appliances, weapons, you name it, and he built it. Since a lot of the trash that was put on Junk was often from many different cultures, he learned a great deal about a variety of technologies. When they began receiving Earth TV, he watched it with some interest, especially the science fiction shows. Each time a new series appeared, he would take piles of junk and fashion vehicles and weapons like those he was seeing. But in 1966, when Star Trek first premiered, he was absolutely taken in by the show. Watching, re-watching, and watching over and over each episode he recorded, he began to talk a lot like Captain Kirk, but also switched to some of the other character personalities if the situation suited it.

As the movies were released and later broadcast on TV, he watched them as well, and began incorporating concepts seen from them into his own personality. Each subsequent movie he absorbed eagerly, but in 1987, when the Next Generation series was launched, he feel completely for it. He renamed himself Phase-Ar, and modified his alt mode into that of a Federation Type 6 Shuttlecraft seen on the series, complete with impulse and warp drive using some modifications of his own design. Each subsequent series just fed his fervor, and by the beginning of the 21st century, he’d fashioned himself weapons to simulate his favorites from the show. A Federation phaser rifle, complete with variable power settings became is main weapon. To give himself photon torpedoes, he fashioned small missile like devices containing a small anti-matter charge. Once fired, the impact on the target caused it to release it resulting in a significant explosion. For up close and personal fighting, he fashioned himself a Klingon Bat’leth from a sheet of alien alloy he found on Junk. Hard, durable, and able to be sharpened to a razor edge, he became quite proficient with it, especially after studying Worf’s moQ’bara moves.

By 2010, he’d watched every Star Trek series, and even watched the new Star Trek movie. He watched it with a rather critical eye, and rather enjoyed the premise of the movie in which all that had been done was still done, but now a new reality had been created, leaving the original timeline open to continue if necessary, but a new one open to more stories. He’d finally made up his mind, and he set off for Earth to seek out human life and learn more about Earth, the wonderful world that made his favorite series possible.

Phase-Ar has arrived on Earth. He's already had a run-in with Dr. Arkeville and Stiletto of the Decepticons, and hasn't made friends with the enemy.

In 2016, Kup, Wheelie, Arcee, Sit-Com, and Phase-Ar travelled to Goo, where they discovered the tracking station had been destroyed by death crystals. The Autobots and Junkions were attacked by Astrotrain, revealing the Decepticons had the crystals now. Kup revealed foreknowledge of the crystals, and explained he’d encountered them before, and had been held prisoner on the source world, Dread.