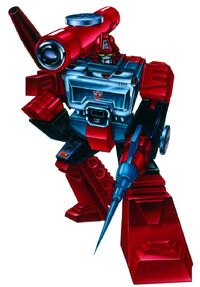 PERCEPTOR's thirst for knowledge is unquenchable. He will seek it to the exclusion of all else. To him, being on Earth is like a miner finding a new vein of gold - each eagerly plumbs untold riches, neither knowing when his source will run out, if ever. Perceptor's specific role in the Autobot cause is studying how best the Autobots should adapt to Earth, and conversely how Earth's alien environment is affecting the Autobots. Autobot Leader Optimus Prime considers this research vital to the Autobots' survival as long as they're marooned on Earth. Although good-natured and friendly, Perceptor is not easily drawn into joining with other Autobots to do anything other than his work.

Perceptor is extremely intelligent. His capacity for data storage is second only to Optimus Prime's. Although familiar with all the sciences, his specialties are metallurgy, molecular chemistry, and electrical engineering. He has two different capacities in microscope mode. He can magnify objects up to 10,000 times as an optical microscope and up to a million times as a scanning electron microscope. Using his magnifying lenses to concentrate and intensify its beam, he can convert his lens barrel to a powerful light cannon. It can blast a hole in a cinder block wall 2,000 miles away with pinpoint accuracy. He can use the cannon in robot mode or convert to a third form and use it as a stationary field artillery piece. He also carries a concussion rifle in robot mode.

If he were human, Perceptor might be called absent-minded, since he is rarely aware of anything but the work in front of him. He actually forgets at times that he is involved in a raging war and, as a result, is sometimes a casualty of it. His magnifying lenses, although resistant to cracking, are nevertheless the weak link in his make-up. Any problems with them not only can bring his work to a halt, but can also considerably reduce his offensive abilities.

As Bumblebee grew into his role as Autobot leader, Perceptor acted as consel to Bumblebee . Despite the Autobots' losing more and more numbers, Perceptor's support of Bumblebee never waned. Perceptor presided over a failed "No Confidence" vote to Bumblebee's leadership proposed by Springer. Perceptor agreed to carry out the vote, but demanded that regardless of the outcome, the Autobots would put all of their support behind the leader (be it Bumblebee or Springer). Both Bumblebee and Springer agreed, and Bumblebee ended up retaining his position as Autobot leader.

Perceptor has been available for application since July of 2011. He's currently being temped by bzero in the main universe, and SpikeWitwicky in the Decepticon World universe.