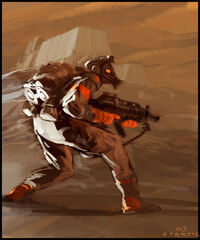 "Come with me if you want to survive."

PATHOGEN is the Joe medic assigned to deal with injuries sustained from Nuclear, Biological, and Chemical attacks. With a degree in biology, he has devoted himself to the study of biological warfare. A former volunteer EMT, he is highly trained in treating wounds in the field, even in the heat of battle. Pathogen is the type of Joe you want with you when Hell itself has engulfed the world. He is capable of using many kinds of explosives, and loves to use flamethrowers to repel the enemy and protect his teammates. Pathogen is a strong believer in fate and will risk his own life to help others or to prevent mission failure. He believes there is a mightier being out there, and considers everything to be destined to happen. A former member of the US Army's Special Forces unit, Pathogen has a desire to lead and is an active participant in combat. A man of courage and strength, he is best known for his loyalty. After a battle is done, he tends to his wounded comrades before caring for himself. Like his name implies, Pathogen can invade enemy territory and leave them weakened and dying, all the while protecting his allies from harm.

In 2010, Pathogen quit the Army and the Joes, and was rumored to have defected to Cobra. He was last seen working in a Cobra dispensary.

Pathogen was a defector. Last seen March of 2010.

Pathogen was created and portrayed by his creator.

Retrieved from "https://tfumux.fandom.com/wiki/Pathogen?oldid=51432"
Community content is available under CC-BY-SA unless otherwise noted.