This page is for the evil Shattered Glass Autobot Overdrive. For his heroic main-universe counterpart, see Overdrive. 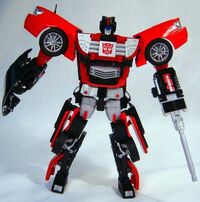 “The race is not important; the finish line is.”

OVERDRIVE sees himself as a brilliant strategist and leader – he refuses to acknowledge that other Autobots consider him an obnoxious aft who couldn’t lead Insecticons to a picnic. Nonetheless, he continues to try to take the lead in any situation, which is guaranteed to get him killed eventually, either directly by his commander, or indirectly by leaping into danger while the rest of his team stands back and lets him get overwhelmed.

Besides being able to travel up to 190 mph while in car mode, Overdrive can deploy his convertible "ragtop" roof in less than .002 seconds, an ability of which he is really proud and other Autobots are understandably unimpressed. He is otherwise unarmed in that mode aside from a ram plate that protects him from head-on collisions. In robot mode, Overdrive carries an engine-gun and shield, which he often uses to simply bash his way through Decepticon lines.

Although blazing fast in car mode, his overall maneuverability is often inferior to other ground-based-opponents. An amateur strategist, Overdrive often acts as if he should be the leader of any group to which he’s assigned. Smarter and more experienced officers don’t often appreciate his attempts to take over.

Like the rest of the Omnibots, Overdrive was reformatted for Earth service, but after being left behind with the launch of the Ark was re-assigned to Remote Patrol Six.

Overdrive was present during the Remote Patrol Six attack on the V’ger in orbit around Cybertron in 2012.

Overdrive’s exciting Omnibot transformation is from open convertible to ragtop.

Overdrive is for temping, should anyone want him. He’s sure someone will any minute now. Any minute…