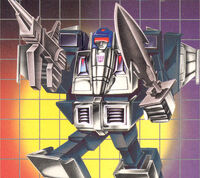 The OVERCHARGES are the latest model of Quintesson mass-produced warrior-drone (aka "Terrorbots"), using technologies gleaned from the Decepticons. Each is armed with a powerful heat rifle and a stunning "Null Gladius" sword. Produced in countless numbers and sold to whatever buyers can cough up the credits, Overcharges are strong, fast, powerful, and in the wrong hands, can overrun worlds.

In preparation to invade Earth, a legion of Overcharges has been retrofitted to transform from robot mode to a Type 74 tank and a MiG-25 fighter jet. In jet mode, it features two high-tech missile launchers, one within each wing assembly. A few of them have been painted like Decepticons to sow confusion amongst the Transformers of Earth.

Overcharges aren’t too bright, and are rather disorganized without proper supervision. However, when led by Quintesson field commanders, their combined might can be devastating.

OVERCHARGES have recently been mass-produced in preparation for the Quintessons's invasion of Earth. A few of them have been painted like Decepticons to cause confusion.

The Overcharges were prepped in 2013 for the invasion of Earth. Later that year they were deployed during invasions of Cybertron and Earth. When the Quintessons were driven out, many of the Overcharges were captured for dissection and study.

OVERCHARGES are available as DCs in the current Quintesson Invasion TP.