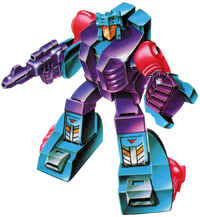 A menacing, mechanical monster whose presence makes any body of water unsafe for swimming - or anything else - Overbite is just about the most dangerous creature ever to prowl the ocean depths. And perhaps he's the most obsessed, as well, for he sees his life as an endless quest for prey. As soon as he finishes off one victim, he goes hunting for another. But as much as he enjoys his work, he looks to occasionally take time off to amuse himself. For fun he chomps holes into the sides of oil tankers and sinks cruise ships. As Overbite likes to point out, "The only thing better than swimming through an oil slick is swimming through an oil slick full of drowning fleshlings."

In shark mode, Overbite is virtually unbeatable in underwater combat. His attack is unrelenting. His teeth and talons can tear through the hull of a battleship. His liquid cooled, turbo-powered 3,500 horsepower engine propels him through the water at up to 70 knots. He never needs to surface, except for regular maintenance checkups. He carries a freeze beam blaster that can trap any underwater prey in a block of ice. He can transform to an amphibious weapons-base mode, in which he can create tidal waves by wagging his tail at super speed. His front end converts to a jawbreaker cannon, which shoots powerful metal-eating, salt-based corrosives. In this mode, when his fellow Seacons combine to form the super-robot Piranacon, Overbite serves as Piranacon's hand-held weapon. Overbite also uses the jawbreaker cannon in robot mode.

Although virtually unbeatable underwater in shark mode, Overbite is quite literally like a fish out of water in robot mode on land. There he is slow, awkward and relatively weak. Needless to say, he prefers to remain aswim.

In 2016 the Seacons attacked the Hydrax Spaceport and hijacked the Millennium Falcon. Soon after they attacked the Central Spaceport in Ibex, and then used underground tunnels to attack Iacon, setting off bombs in Trion Square and injuring dozens of civilians.

The Seacons are TP characters available for temping. Overbite was played by shadowcastershadowlight during the Quintesson Invasion TP. In 2016, he was taken over by Shebakoby.