This profile is for the Autobot Mini-Bot. For the G.I. Joe character, see Sgt. Outback. 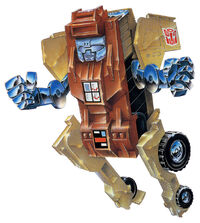 Outback thinks going by the book is going the long way. Confident in his own abilities as a warrior, he feels little need to follow someone else's plan. And he'll give anyone an argument who tries to tell him otherwise. In fact, when in vehicular mode, he feels little need to even follow paved roads! He'll cut across parking lots, sidewalks, backyards, virtually anything to get where he's going. Gruff, cantankerous, a Transformer of few words, Outback has few friends and even fewer who truly understand the reason for his anti-social behavior. Deep down, he believes he's destined to be another casualty in the Autobot-Decepticon war, so he doesn't do anything that he considers wasteful of his time while he's still functional. War is a serious business, and Outback believes it requires a serious - and total - commitment.

In vehicle mode, Outback can go up to 110 mph with a range of 800 miles. He can travel over the roughest terrain and his 4-wheel drive allows him to climb grades of up to 50 degrees. He carries a turret-mounted mortar cannon that shoots armor-piercing shells up to a distance of 3 miles. He is impervious to most artillery fire.

Outback's philosophy of self-sufficiency often results in his being alone and outnumbered in battle situations. He's prone to tire blowouts due to his penchant for traveling rough terrain.

Flattop, Outback, Pipes, Tailgate and Subsea all were cadets at the Autobot Military Academy.

Outback was killed by the Fallen in 2019. Later that year he was resurrected by Bad Mort and had to be killed again.

Outback is no longer available for application.

In Cobra World, Outback as been rebuilt and modelocked as a Stinger, and is used as Major Bludd's personal transport.