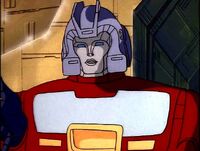 "Decepticons are so cool! Look, they can fl -- aaargh!"

The young Orion Pax was a factory worker who looked up to the leader and his army of Decepticons, as they could fly in robot mode without the use of other vehicles. One day, Megatron showed up at Orion's energy factory and deceived Orion while the Decepticons stole the energy. In the ensuing attack, Megatron seriously wounded Orion Pax, along with and Orion's friend Dion. Orion was taken to Alpha Trion, with the help from the Aerialbots, who were there as a result of traveling back through time.

Alpha Trion was already working on a way to fight the Decepticons, and with the arrival of the damaged Orion, Alpha Trion used this opportunity to create a new kind of warrior. He set forth to repair and rebuild Orion Pax, recognizing his especially stronghearted nature. Orion was renamed Optimus Prime, and confronted Megatron. Optimus bested Megatron in the first of their many battles, and Megatron beat the first of his many retreats. Optimus Prime thus became the revered leader of the Autobots.

Optimus Prime was Orion Pax before he was leader of the Autobots.

Orion Pax hasn't had a big impact on MUX history, aside from his role as part of Optimus Prime's backstory.

Retrieved from "https://tfumux.fandom.com/wiki/Orion_Pax?oldid=28375"
Community content is available under CC-BY-SA unless otherwise noted.