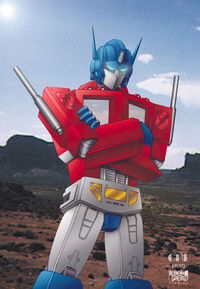 "Freedom is the right of all sentient beings."

If he had been born on Earth, he could have be a doctor, a mechanic, a scientist, and a warrior. But on Cybertron there is no difference between these professions. So OPTIMUS PRIME used his skills to heal and repair the world around him and, if necessary, to fight. Both in power and intelligence, he had no equal. He could be immensely kind and his compassion extends to all that lives. Yet he battled unceasingly to protect the weak and defend what he believed in. In robot mode he could split into three components. Optimus was the robotic sentient being that is the storehouse of his vast knowledge and strength. He could lift 4,000,000 lbs and a blow from his fist exerted a force of 12,000 pounds per square inch. He carried an energy rifle that could burn a hold in the nosecone of a Decepticon jet fighter at a distance of 30 miles. His second component was Roller, a small cart-shaped device that he used to unobtrusively slip behind enemy lines. He could maintain radio control over it at distances up to 1200 miles; having Roller there was like being there himself. He could operate by remote control his Combat Deck module up to a distance of 1500 feet away. The auto-launcher could use a variety of artillery and radiation beam weapons. In transport trailer mode, he hada top speed of 150 mph and could make use of his trailer auto-launcher.

During his time as Autobot leader, Optimus Prime was the beacon of hope for nearly all Autobots around him. Unfortunately, that light was snuffed out all too soon thanks to Megatron.

The Autobots' desperate attempt to launch the Ark ended in failure, and the majority of Iacon's inhabitants were permanently off-lined. Megatron killed Prime with his bare hands and took over Earth. Megatron also reigned supreme over Cybertron, as well as many other worlds conquered by the Decepticons, now truly an Empire. The few survivors of the Ark Massacre lived beneath the surface of the planet, determined to survive no matter the cost.

When his spark merged with the Matrix, Optimus Prime was quickly banished by the elders, where he remained for hundreds of years until Alpha Trion joined the matrix after he was killed by Megatron. The elders blamed Optimus Prime for losing the Matrix and endangering the universe since the Autobots' greatest and most powerful possession was now in Megatron's hands. Optimus Prime could not explain his actions on why he chose to hold onto the Matrix and not pass it off to the Autobots who managed to flee the Ark, only that he felt the Matrix was leading him to hold onto it despite the fact that he was facing certain death.

Alpha Trion used his vast knowledge, combined with the knowledge of the elders to show how the universe would have folded out had Prime handed off the Matrix. In that scenario, a power-hungry Megatron ended up killing the last remaining Autobots in order to obtain the Matrix. A mere few thousand years later, as predicted by the elders, Unicron would return to Cybertron and without an Autobot to open the Matrix, the chaos-bringer would have devoured Cybertron and all its inhabitants. When given that "alternative" scenario, the elders apologized to Optimus Prime, and Prime was welcomed back into the Matrix fold.

When Unicron actually did attack Cybertron in 2005, Megatron forced Autobot prisoner Hot Rod, to open the Matrix that Megatron had ripped out of Optimus Prime's chest. Once Unicron was destroyed, Megatron killed this "Last Autobot," believing then that he had extinguished the final spark of the Autobots forever.

Bumblebee leads a ragtag group of survivors, preparing a last desperate surprise strike against the Decepticons. The suprise attack succeeded, and the Autobots are now enjoying a life of freedom away from Decepticon rule on the planet of Nebulous. Five years after their arrival, construction on the massive Autobot City was complete. Adjacent to Autobot City is a memorial to all Autobots who perished during the Decepticon's four-million year rule, in addition to the Autobots lost during their battle to leave their planet. The bodies of Optimus Prime, Ultra Magnus, and Alpha Trion currently rest in this temporary memorial. The Autobots hope they will eventually be able to return these three significant figures in Autobot lore back to Cybertron when they retake their planet and give them a permanent resting place for their servos.