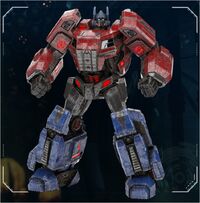 If he had been born on Earth, he could be a doctor, a mechanic, a scientist, and a warrior. But on Cybertron there is no difference between these professions. So OPTIMUS PRIME uses his skills to heal and repair the world around him and, if necessary, to fight. Both in power and intelligence, he has no equal. He can be immensesly kind and his compassion extends to all that lives, including the neutrals of Cybertron. Yet he will battle unceasingly to protect the weak and defend what he believes in.

At a pivotal point in Cybertron's history, the young Optimus Prime managed to defeat the Decepticon Leader Megatron in single combat. Without a strong leader to unify them, the remaining Decepticons quickly turned on each other, breaking into small warring bands. Now, only Polyhex remains as a bastion for the Decepticons. Cybertron is relatively peaceful, and due to Autobot explorations, the planet is once again rich with Energon. Guardians keep the peace, and from the outside, things look perfect - at least, in Iacon.

However, without serious challenges, cultural stagnation has set in within the Autobots' ivory tower of Iacon. Prime is a distant, hands-off leader, leaving enforcement to his Guardians and lieutenants. The Autobots have grown lazy and weak, while envy grows within the Decepticons outside the walls, and the Quintessons gaze at the fractious world, seeing it ripe for the picking. The Bots have become soft without the constant threat of Decepticon attacks. They're complacent. Things seem calm and safe within the dome of Iacon, but should the Guardians be somehow compromised, the Autobots would likely be slaughtered.