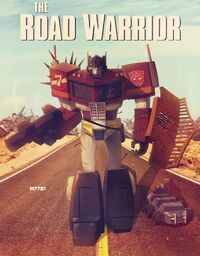 OPTIMUS PRIME has withdrawn from life on Cybertron past war. He has become a reclusive hermit on the planet, blaming himself for all the countless eons of war. When the AUTOBOTS and DECEPTICONS threw down their weapons and stopped fighting, Prime was deeply ashamed that the war had drug on that long. Blaming himself for being unable to end the civil war, Prime blamed his idealism as 'utter nonsense', and turned his back to the world.

Cartoon origin:Megatron, frustrated about losing air superiority to the Aerialbots, devises a machine called a Kronosphere that sends living beings back in time. Trapping the Aerialbots in the Kronosphere, Megatron sends the Aerialbots millions of years back in time (on Cybertron). While on Cybertron, the Aerialbots befriend a dockworker named Orion Pax. Pax expresses his admiration for Megatron as well as the new crop of Decepticons, though Silverbolt cautions Pax that Megatron isn't one to be admired. Silverbolt's warnings go unheeded and Pax is mortally wounded by Megatron and the Decepticons. Fortunately a kind medic by the name of Alpha Trion sees potential in the dying Autoobt and proceeds to reformat Pax in a new experimental procedure. Alpha Trion's efforts succeed and the young Orion Pax is resurrected into the form known as Optimus Prime.

Optimus Prime's impact on the Autobots cannot be overstated. Facing certain extinction, Optimus Prime helped turn the Autobot resistance into a more military-oriented, efficient, and disciplined fighting force. Eventually, the Autobots under Optimus Prime's leadership were able to stop the Decepticons from taking over Cybertron. This also resulted in a prolonged military struggle that lasted for millions of years.

During this time, countless battles were waged and tens of millions of Autobots and Decepticons lost their lives. This cycle was destined to be dragged into a stalemate with no side budging. That was until Optimus Prime and a team of elite Autobots chose to undergo a daring reconnaissance operation. Taking his top military advisors (Prowl and Jazz) and a team of other esteemed Autobots, Optimus Prime chose to investigate the energy resources in a then unpopulated (by humans) planet. However, their shuttle was ambushed by the Decepticons, led by Megatron. As the craft sustained heavy damage, Optimus Prime made the decision to crash land the crippled craft on the planet. The impact instantly knocked all occupants offline and they remained so for nearly four million years.

The crash was devastating to both the Decepticons and Autobots on Cybertorn. However, the more mobilized Decepticons were able to take greater advantage of the crash as the Decepticons, led by Shockwave, began to retake much of Cybertron that was gained by the Autobots. The Autobots were pushed back into the role of having to resort to underground resistance tactics to stay alive. However, some Autobots, notably Ultra Magnus and Elita One, were able to step into the leadership void left by Optimus Prime's disappearance.

In 1984, a volcano eruption within Mt. Saint Hilary reactivated the Ark. Within days, the Ark had rebuilt all inhabitants. Optimus Prime's transforming mode was rebuilt into a semi-tractor trailer. The reactivation resulted in a new battleground for the Autobots and Decepticons. Inspired by the news that their beloved leader had not perished, the Autobots on Cybertron slowly began to reclaim much of the territories lost during Shockwave's reign.  Modern historians have referred to this time as the Third Cybertronian War.

Though Optimus Prime doesn't plan on going anywhere anytime soon, he's had enough brushes with mortality to know that his time as Autobot leader isn't infinite. Learning from previous mistakes (mainly not having a definitive, go-to second-in-command on Cybertron during the fated Ark mission), Optimus has spent the past 25 or so years mentoring a select few Autobots to ready them to receive the Matrix of leadership should he perish. Though he hasn't officially deemed any certain one as the next Autobot leader, most in his inner circle know Ultra Magnus and Elita One are considered to be "next in line" to receive the Matrix, followed closely by trusted Earthbound officers Jazz and Prowl.

In 1997, Unicron arrived early. Prime tried to open the Matrix, but failed. Unicron was defeated anyway by a combined assault of the Autobots, Decepticons, and an alien ally.

In 2010, when a rift opened between the regular and Shattered Glass universes, Prime went through to investigate the strange, off-kilter world. However, Jetfire, who Prime left in charge while he was gone, had somehow gotten word that Prime is due to return soon.

However, In July of 2012 Optimus Prime disappeared once again for several months, during which Jetfire and Prowl ran the Autobots.

In October of 2014, Optimus Prime helped provide support for a small team of Autobots and G.I. Joes who infiltrated Decepticon City to capture Dr. Arkeville and rescue Typhoon.

Optimus Prime was commander of the ill-fated maiden voyage of the Spirit of Freedom.

In 2016, Prime travelled with Arcee, Elita One, Kup, and Swish to Dread, where they destroyed Megatron's death crystal cannon and freed the Dread Slaves, cutting off the Decepticons' source of death crystals.

Optimus Prime hasn't been seen in thousands of years. Many think he may be dead and the Matrix died with him.

Prime is played by User:MightyShoxy in the Apocalypse World TP.