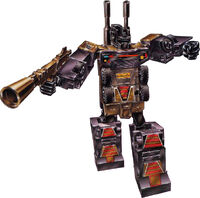 Perfection is what Onslaught seeks. He believes the key to a mission's success lies in its planning, not in its execution. Thus, a perfect plan virtually guarantees a victory. Onslaught prefers the intellectual battlegrounds of the mind, where he can carefully devise and polish his sinister schemes, to the physical battlegrounds of the war, where events don't always unfold as expected. The four Combaticons under his command consider him aloof, even dreamy, but a brilliant tactician. Typically, Onslaught takes a backseat role in the assaults he plots, choosing to observe and re-evaluate his strategy rather than actually engage in combat. But, when stirred to action, he is a relentless, furious fighter, a terrifying contrast to the reserved thinker he is otherwise. This side of Onslaught's personality comes as a surprise to most of the other Decepticons, but those who understand him know his violent behavior is born out of frustration that his plan didn't work, forcing his involvement, rather than any suppressed lust for battle hidden in his character.

In missile trailer mode, Onslaught can reach speeds of 100 mph. His range is 2400 miles. He can launch photon missiles, with a range of 6500 miles. Each missile contains three independently targetable shells, each of which has an explosive force equivalent to 3000 tons of TNT. In robot mode, he uses a sonic stun-gun, which is capable of crumbling a hillside with one blast. He combines with his fellow Combaticons to form the giant robot Bruticus.

Onslaught often puts too much faith in his plans and winds up going along with them longer than he should. Consequently, he doesn't get personally involved as quickly as changing situations might warrant. Electromagnetic interference can impair the accurate targeting and delivery of his missiles.

Onslaught was one of several Renegade Decepticons who had been imprisoned in the Decepticon Detention Center on Cybertron for plotting against Megatron. After Starscream was booted from the Decepticon base for attempting to overthrow Megatron (again), he decided to form his own army. Travelling to Cybertron via the Space Bridge, he "liberated" renegade personality components and placed them in human military vehicles left over from Earth's second World War. At first, the newly-dubbed 'Combaticons' were hardly grateful to Starscream for their freedom until the Decepticon air commander revealed he had predicted their treachery and thus did not equip them with vital energy absorbers. Onslaught and his fellow Combaticons agreed to work with Starscream to overthrow Megatron on the promise of being given the vital components. Onslaught worked in capturing two Autobots, though he got into an argument with Vortex over who was responsible for the act. Later, while recharging at a power station, Starscream's brigade was confronted by the Decepticons under Megatron's command. Anticipating that Devastator might come into play, Starscream ordered Onslaught and the other Combaticons to merge into the dim-witted Bruticus. The Combaticon combiner managed to soundly defeat Devastator, but was in turn defeated by a surprise attack by Menasor. For their treachery, Megatron banished Onslaught, his comrades and Starscream in space on a desolate asteroid. Starscream's Brigade

After a falling out with Starscream, Onslaught became the mastermind of Operation Revenge and helped defeat Shockwave's forces on Cybertron. He also used his external backpack and altered the Space Bridge to send Earth into the sun. It didn't work as he was defeated by the allied Decepticons and Autobots. Then Megatron had the Combaticons, including Onslaught, reprogrammed to serve him. Poor guy, can't seem to get a break. The Revenge of Bruticus

After that little lobotomy, the Combaticons were deployed to Earth's Middle East to assist in Megatron's scheme to steal military jets, rebuild them into cars, drive them out of the owners nations, and then rebuild them back into drone jets in friendly territory. Yeah. Onslaught and the other Combaticons attacked the Aerialbots when they snooped around, managing to force Slingshot to crash into a cave (YAY!). Later, Onslaught and the ground-based Combaticons form an anti-aircraft screen against an Aerialbot attack on the Fortress, then merged into Bruticus, but was rather quickly defeated by Superion before being blown away by the exploding oil wells. Aerial Assault

Back in the United States, Onslaught led the Combaticons in driving down the road of a random city for no apparent reason until they were confronted by Defensor. Though the Combaticons formed Bruticus, they were blown to pieces by a single shot from the Autobot, with Swindle being the only survivor. Swindle later sold the parts of his comrades, but was forced to buy them back for Megatron's next Crazy Scheme. The Combaticons formed Bruticus to operate the orbital disruptor cannon, but was shot by the cannon itself when B.O.T. tampered with it. B.O.T. (episode)

Onslaught is second in command of the Decepticon Assault Infantry division.

"Blast Off came to me with an idea of an energon raid upon a alcohol brewery in the northern United States. In the middle of the conversation, Shockwave walked in and mentioned something about Alcohol being a good energy source. So I came up with a plan to involve Shockwave and the Combaticons to get inside of the brewery without a shot being fired.

The Plan was successful, but the guard outside tipped off the autobots and they sent an Autobot and a Junkion to get us out of the plant. It didn't work. Thanks to Shockwave's analysis, and his device to create energon cubes, we were able to get away with quite a few energon cubes, and a formula to create more high grade alcohol. Once Shockwave is able to work out a process, we'll have even more energon.

The Combaticons and I will need a few days for repairs before the next operation, however.

With the Decepticons' energy reserves in Polyhex destroyed, they need a new way to supplement raids, and fast. Scrapper has worked out plans to build a super-reactor on Cybertron, but he needs energy, equipment, and fissionable materials. To that end, Decepticons are staging raids on nuclear power plants. The Autobots must stop them, not only to keep the Decepticons from getting a new source of energy, but also to keep them from causing an accidental nuclear meltdown.

After drawing the Dinobot's attention towards Blackrock Industries, the Combaticons and I struck our true target, The Ghawar oil field in Saudi Arabia. We were able to get most of the energon cubes into Blast Off when Optimus Prime, Cuffs and that loud mouth Sky Lynx showed up. We gave them a good fight, but with our objective secure, the Combaticons retreated.

Swindle, those energon cubes you have in your subspace storage better be put into energon storage before this cycle is done, or that'll be taken out of your rations.

There was a massive battle, the Combaticons slew many, but in the end Blast Off was too far away, up in the air, when he looked down and saw an Autobot kill his leader in a massive explosion. A combination of good strategy and sheer good luck and Onslaught, the great and mighty Onslaught who had always had Blast Off's total loyalty.... had died. Blast Off blew up the Autobot shortly after in a rage, raining down an orbital bombardment that laid waste to the scene. Of course, he searched through the rubble of the first explosion tirelessly, but everything seemed devastated. Onslaught was gone.

Onslaught was temped by Whitedagger until he was taken over by Zerombr.