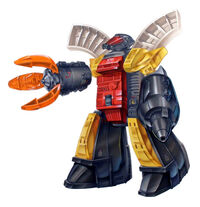 Omega Supreme is one of the largest Autobots there is. He isn't much for words, preferring his massive frame and equally massive weapons to do the talking for him. Omega is the last line of defense for the Autobots, a titanic guardian robot capable of instilling fear and panic into the sparks of Decepticons that dare face him on the field of battle.

In robot form, Omega Supreme possesses enormous strength and firepower. A blow from one of his arms can shatter a mountainside. With his clawed arm he can lift 300,000 tons. The plasma blaster on his other arm can pulverize a solid 12' × 12' × 12' steel cube. The laser cannon mounted on his head can hit an object as small as a can at a distance of 50 miles. His armored form is virtually impervious to all non-nuclear explosives and energy-beam weapons. He can change his form into two other forms simultaneously: a laser cannon tank and a rocket with launching pad. The launching pad can boost its rocket into planetary orbit. The rocket is adaptable to communication, military and transport uses.

In both intelligence and speed, Omega Supreme is a bit slow and plodding. He makes an easy target, but his enormous firepower can usually compensate for that.

Millions of years ago, Omega Supreme was a member of the legendary Guardian robots, and was charged with defending Crystal City, the most spectacular city on Cybertron. He befriended the Constructicons, the city's creators. However, as it would happen, the Constructicons were attacked by Megatron's Robo-Smasher and converted into Decepticons. The now-evil Constructicons convinced Omega to leave his post to help defend another city, and promised to look after the city in his stead. When he left, they demolished the Crystal City, to Omega Supreme's horror. He tracked them down and tried to change the builders back into Autobots, but the process was irreversible, and the treacherous Constructicons lured Omega into an ambush by the Smasher. The Robo-Smasher attacked Omega, but it was destroyed before it could convert him.

Some time after these events transpired — after the launch of the Ark and the Nemesis — the Constructicons left Cybertron in a starship and tried to locate the missing Megatron. Omega Supreme pursued them, "for millions of years, across the galaxies"; eventually, the Constructicons rejoined Megatron on Earth, and Omega Supreme followed them there, still seeking revenge.

In late 1985, the Autobots used Omega Supreme to follow the Decepticons back to Cybertron when they intended to use Vector Sigma to create a new group of Decepticon warriors. After failing to stop the Decepticons from creating the Stunticons, the Autobots created a new team of their own to counter the new threat, the Aerialbots. As Omega Supreme escaped Cybertron, he was hit by weapons fire from the Centurion droids, and once he safely disembarked his passengers on Earth, he catastrophically exploded. Ratchet, Wheeljack and Sparkplug Witwicky connected Omega Supreme's mind to the Ark's life support unit while they set about putting the giant back together. The arrogant Aerialbots, unimpressed with both the Autobots and the humans they protected, refused to help their comrades in defeating the Decepticons until their group leader Silverbolt showed them how Sparkplug was able to disregard his fatigue and continue repairing Omega Supreme simply because of his concern for a friend's well being. Soon afterwards, the Aerialbots were facing defeat as Superion at the hands of the Stunticon combined form, Menasor, when the newly-repaired Omega Supreme suddenly appeared and helped them defeat the combiner and send the Decepticons packing.

He transported the Autobots and the Aerialbots back to Cybertron when they detected strange energy readings emanating from the planet. The trip expended his energy so he was forced to sit out the mission. While the Autobots dealt with a time machine sending the Aerialbots to the past, the Decepticons reacted one of Omega's fellow Guardian Robots. After the Aerialbots returned from their trip through time, Silverbolt handed over some power packs they had taken from the Cybertron's Golden Age to refuel Omega.

Omega Supreme usually hangs out on the launchpad of Autobot City when he's not needed as the Autobot Shortbus. In 2016 he was sent to Cybertron to guard Iacon. In 2017 he was instrumental in leading Trypticon into a trap which buried the Decepticon cityformer deep below the surface of Cybertron.

Omega Supreme usually hangs out on the launchpad of Autobot City when he's not needed as the Autobot Shortbus.

Omega Supreme is a TP-Only character, and is usually played by Carrie. In 2016, he was played by Matt-Bat. In 2017, he was taken over by Sunder9x9.