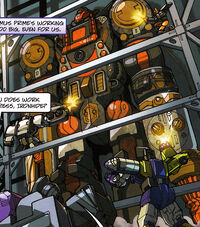 OMEGA DOOM is the largest Autobot ever built in the Shattered Glass universe. He isn't much for words, preferring his massive frame and equally massive weapons to do the talking for him. Omega was created as the ultimate weapon, a titanic force of destruction capable of instilling fear and panic into the sparks of Decepticons that dare face him on the field of battle or innocents caught in the middle. Either is fodder for Omega’s uncaring swath of doom.

In robot form, Omega Doom possesses phenominal strength and firepower. A blow from one of his arms can shatter a mountainside. With his clawed arm he can lift 600,000 tons. The plasma blaster on his other arm can pulverize a solid 24' × 24' × 24' steel cube. The laser cannon mounted on his head can hit an object as small as a can at a distance of 100 miles. His armored form is virtually impervious to all non-nuclear explosives and energy-beam weapons.

Omega Doom can change his form into two other forms: a massive terraforming harvester tank, and an intergalactic invasion rocket. The rocket is adaptable to communication, military and transport uses, capable of bringing entire armies of Autobots to new worlds to conquer.

In speed, Omega Doom is a bit slow and plodding. He makes an easy target, but his enormous firepower can usually compensate for that. His hatred of all life make him a perfect tool for Emperor Prime’s plans, and with enough weaponry to scour the planet clean, Omega will be a difficult opponent to stop.

Millions of years ago, Omega Doom was a member of the legendary Guardian robots, and was charged with defending Crystal City, the most spectacular city on Cybertron. He befriended the Constructicons, the city's creators. However, RECENTLY, the Constructicons were attacked by Emperor Prime's Robo-Smasher and nearly converted into Autobots (all but Hauler managed to get away). The now-evil Hauler convinced Omega to leave his post to help defend another city, and promised to look after the city in his stead. When he left, Emperor Prime demolished the Crystal City, while Starscream watched in horror. When Omega learned what happened, he tracked Hauler down and tried to change the builder back into a Decepticon, but the process was irreversible, and the treacherous former Constructicon lured Omega into an ambush by the Smasher. The Robo-Smasher attacked Omega, convert him into a truly evil, soulless monster.

Since then, Emperor Prime has instigated a project to turn Omega Doom into the largest, most powerful weapon of mass destruction ever conceived. In a hidden bunker miles beneath Polyhex, isolated technicians work to construct a massive new body for Omega Doom, under the harsh watchful optics of Ironhide and at the direction of evil scientist Skids. Little do they realize that when Doom is complete, his first mission will be wipe out everyone who knows of his creation (and therefore strengths and weaknesses).

As the TP begins, Omega Doom's new body is still under construction. Emperor Prime has dark plans, however, for his use once he is complete.

The Omega Doom Project is a massive, hidden undertaking. The engineers working on the project are sequestered away from the other Autobots, and forbidden communication with the outside world. Ironhide watches over them with a heavy hand, and any that try to escape are met with quick death.

Notable Autobots assigned to the project

Once activated, Omega has the following programming:

1) Kill all the engineers that worked on him, so no one will know his weakness.

2) Kill everyone else on Cybertron. Priority: Decepticons first, nuetrals second, any Bots left behind or get in his way

3) Only Ironhide and Prime are to be obeyed and spared.

The Omega Doom project is currently known only to Emperor Prime, Ironhide, and the isolated techs working on it.

Omega Doom is a TP-Only character, and is not available for application.