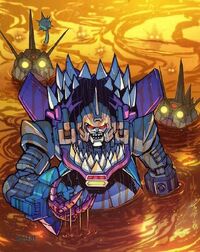 Sometimes Evil Inc. recruits a new team member from outside the company. Such is the case with the horrific Odd Jaws. This Sharkticon was found hilarious as he constantly tried to eat Evil Junkions, and as such was hired on full time. The hiring process left the poor, dumb thing even poorer, and dumber, but his dental plan has never looked better! Barely able to follow orders, and only vaguely aware of his existence now, Odd Jaws lives to serve...and to eat.

A stout Sharkticon that has been partially mangled/reformatted. He's been painted to appear to be wearing a formal black and white suit, complete with bow tie. His teeth have been moderately enhanced, he wears a razor-sharp top hat at a jaunty angle, and his left arm has been replaced with a malicious large, clampy arm, with three large tines on it for grabbing prey.

This Sharkticon was found hilarious as he constantly tried to eat Evil Junkions and as such was hired on full time.

In 2018, Odd Jaws was deployed as a decoy against the Autobots in Oregon, allowing Ar-Gent Silverfinger to infiltrate the Ark.