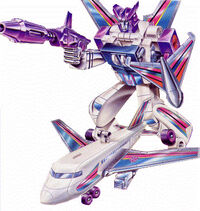 OCTANE is a greedy, mean-spirited bully. Just to prove his own value, he's more than willing to let a fellow Decepticon slip painfully into inoperative status rather than offer them a drop of lifesaving fuel. Only after his thirsty victim begs for fuel and praises Octane does Octane relent. He entertains himself by forcing vehicles to swerve off highways and commercial aircraft to abort landing approaches at airports. Crashes caused by him make him howl with laughter. In Boeing KC-767 Advanced Tanker jet mode, Octane has a range of 7000 miles and can reach a speed of 750 mph, though he has virtually no offensive capabilities. In tanker mode, his range is 65,000 miles and he can go up to 90 mph. He can carry 10,000 gallons of fuel, and has internal equipment that modifies oil-based fuels into energon. He has internal hoses that he uses to drill for and siphon off liquid fuel sources. Though heavily armored in this mode, he is extremely vulnerable to a hit from below the tank. In robot mode, he carries a liquid-fuel flamethrower and a deflecto-shield, which turns back whatever beam or artillery that strikes it on whoever fired.

Octane served under Shockwave during the lost years, until 1986 when he came to Earth to serve under Megatron.

Octane has parlayed his resource control into a sweet command position in Decepticon Medical.