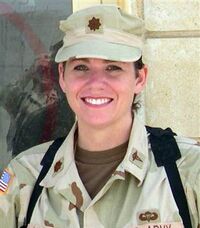 "It isn't enough to mend the body; you must treat the soul as well."

Gentle yet stern, NIGHTINGALE does her best to ease the sufferings of those around her. Born to immigrant parents who served in the USCG, Nightingale enrolled in pre-med straight out of high school. Knowing the perils soldiers faced on the front lines, she signed up with the Army to be trained as a combat medic, after she earned her doctorate. After completing her field training she was recruited into G.I. JOE as a medical officer. Although she prefers to stay far away from battle, she will not hesitate to brave a firefight to rescue the wounded, of either side. Her skill in tending soldiers doesn't end with their physical wounds; Nightingale also acts as a counselor, helping those in her care, and even those who are not, as a mother would help her children. Skilled in field medicine and surgery equally, she displays a tender and warm bedside manner, no matter the situation.

Nightingale is a sweet and caring woman, touched by tragedy, but not chained by it. Raised the daughter of UNSC sailors, Michel was initially leery of a military career; not out of cowardice, but because she didn't think she could do much good in combat. At her father's insistence, she pursued a career as a doctor, finding great satisfaction in her work.

She enlisted in the Army, and, and by extension the Joes, after her son, William, was killed in combat when his unit was ambushed by Cobras. Her son's squad was on routine patrol when they were ambushed. The squad did not have a combat medic with them. After dealing with her grief, Michel resolved to find a way to spare others the pain she had felt.

Even though her son is dead because of Cobra soldiers, Michel does not hold anger towards Cobra troops; she lays blame squarely on the shoulders of the Baroness, Major Bludd, and of course Cobra Commander himself. She views Cobra soldiers as misguided and potentially damaged human beings, in need of a kind hand. Her unending compassion is tempered by the knowledge that some people can't be saved - or just don't want saving.

She insists on making sure that her patients are healed both in body and in mind, as well as she can manage. She refers to the soldiers in her care as ‘her soldiers’, and is protective of them. Those who knew her before she entered the military insist that she is trying to fill the void in her heart left by her son's death, but she maintains that she's simply acting as a medical officer should.

In 2013 Dr. Miller started deploying and working with the Joes as a field doctor.

Lifeline is particularly enamored with Dr. Miller, but he tries to keep their relationship a secret, with varying degrees of success.

Her greatest strength is her commitment to her duty; she will let nothing get in the way of her medical duties. She can tune out any distraction, be it gunfire, general chaos, or even bellyaching from her patients. That's not to say she ignores everything around her; it's more that she can identify non-important sounds and events, and block them from her attention.

Her greatest weakness is her compassion, however. She will grant aid to any who need it, which means she could easily be lured into a trap by a ‘wounded gazelle gambit’. She isn't naive, but her training as a doctor, paired with her naturally caring personality, leads her to try and mend any wounds she sees - even if she'd be better off leaving well enough alone.

Family and other such relations

Michel was once happily married to a man named Damien, but after her son William was killed in action, the two had a somewhat nasty divorce. Michel freely admits she wasn't very kind to her husband back then. She and Damien aren't on speaking terms, although he sends Michel cards on Christmas and her birthday.

Michel's younger child, Rachel, is happily married to an intelligent and hardworking fellow named Bradley. They live outside of Toronto. They're expecting their first child sometime in late May 2014.

As of September/October 2013, Michel is dating Dr. Edwin Steen. She's very taken with him.

Lifeline accompanies a rescue team to Calgary, Alberta, to assist the Canadian authorities with keeping the population safe from severe flooding.

Nightingale and Lifeline perform abdominal surgery on Ace to complete the procedures on the pilot's intestinal injuries, and to document them for the top brass. Afterwards, Chance makes an appearance, and something completely unexpected happens! What would that be? Read Operation: Saving Ace to find out!

Ace finally awakes after his savage beating from Major Bludd.

The Joes rendezvous with Snarl to launch a rescue attempt for a group of civilian survivors. When they reach the city, two Quintesson Warships leave the Bellum and head out over the Pacific Ocean. A squadron of Decepticons follows the Warships.

Lifeline brings in a specialist to rebuild Ace's face.

The Joes recover from the Quintesson attack.

I've been going through the records, and I've noticed that many of you haven't been keeping up to date with your physical exams. While I trust all of you to take care of yourselves, I would appreciate it if you could come in and schedule an appointment for a physical, for whatever time is convenient.

In a world ruled by Decepticons, Michel Miller is a medical doctor in one of the many labor camps run by the occupying alien robots.

Nightingale was created and is played by double0snake.

Retrieved from "https://tfumux.fandom.com/wiki/Nightingale?oldid=54857"
Community content is available under CC-BY-SA unless otherwise noted.