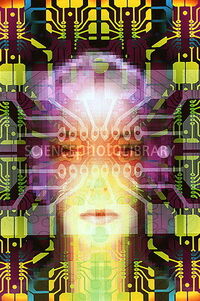 "Diamonds. Art. Information. Technology. It all sells; I just acquire the goods... for a fee."

As frighteningly effective as she is enigmatic, the metapsionic known as NIGHTFALL has turned silent intrusion and acquisition into an artform. NIGHTFALL is able to slip past even the most alert guards and cutting-edge electronic security measures with ease, making her a formidable opponent in any second story operation. While she prefers the clandestine approach, NIGHTFALL is a more than capable combatant with an array of covert weapons - ranging from a simple garrote to a fully dressed and silenced MK-23 SOCOM. Combined with her psychic disciplines of Biokineses, Cyberkinesis, Cyberpathy, Empathy, and Telepathy, encountering NIGHTFALL on the job makes for an inspiring - if terrifying - experience.

Nightfall operates under many aliases, and few who she contacts have any idea with whom they are dealing.

As Nightfall, her past is shrouded in mystery. No information on Nightfall can be found in any database, anywhere. Only paper records and completely offline machines escape being purged almost immediately by a pervasive worldwide computer virus.

Twilight mysteriously resigned from G.I. Joe in October of 2009 and faked her death as far as legal records are concerned. She is now an agent at large, going by many aliases, including Malaysia, Nightfall, Queen of Spades, and Rose.

Nightfall has been behind many major events, but her participation is them is known only to a few of her own choosing. He helped Headman escape from ADX Florence prison, and now his Headhunters are occasionally lent out to her to assist her global schemes.

"Word is Nightfall can get you about anything, if you want to risk dealing with her." - Low Level Street Contact

"There was a thief a long time ago who called herself Nightfall. Systematic B&Es ranging from gems to electronics, over a geographic area that spanned several states. The spree stopped sometime in the late 1980s, and no one was ever caught and charged with the crimes. Couldn't be the same person, although someone taking up NIGHTFALL's Legacy is likely." - Old FBI Contact

"Christ, careful with that name. There is another side to Nightfall, and... well, some say she isn't human. Or is able to do things beyond the range of human capability. I've witnessed... things... firsthand. Things that should not have happened." - Mid-level Criminal Fixer.

The most common way is to put an ad in any nationally syndicated newspaper. 4x6, Times New Roman font. Put in a poem regarding night, and a contact method - email, telephone, or some cryptic frequency. She'll contact via that means :)

"The Thing I Hate" - Stabbing Westward

Nightfall is played by her creator.

Retrieved from "https://tfumux.fandom.com/wiki/Nightfall?oldid=59286"
Community content is available under CC-BY-SA unless otherwise noted.