The Cobra Night Raven S3P, or “Raven” as it is more commonly referred to, is an advanced, long-range, Mach 3+ strategic high-altitude attack and reconnaissance aircraft. It is a beautiful sight to observe, as long as it's not attacking you. It is regarded by many to be the most advanced, most powerful aircraft used by either G.I. Joe or Cobra during the course of conflict by both sides. Everything about the aircraft is pure aerodynamic perfection, from its sleek surfaces to its powerful engines. The plane is capable of 2,310 mph (Mach 3.5) making it one of the fastest land based aircraft in the entire world, even faster than the Lockheed SR-71 Blackbird, upon which the plane is based. The Viper turbo-jets are based around a ram-jet design that only increase in power as the aircraft moves faster. It takes special surgically-altered pilots to fly them, in order for them to survive the high-speeds and incredible G-forces, but there are Cobra jet jockeys lining up for those operations. The Night Raven is capable of taking high-altitude videos and photos, transmitting them back to base, and slipping away unseen by even the most sophisticated surveillance equipment. Even if it is detected During reconnaissance missions, the S3P operates at such high speeds and altitudes that it can outrace most aerial threats. If a surface-to-air missile launch is detected, the standard evasive action is simply to accelerate and out-fly the missile. 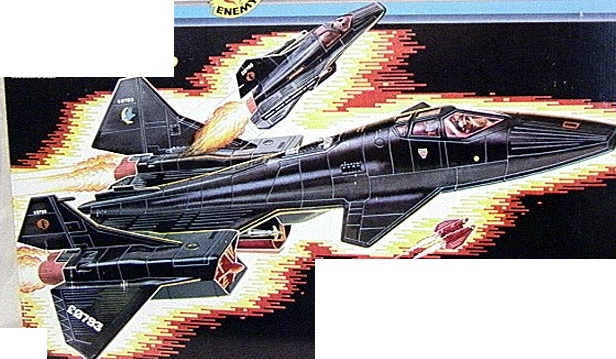 At first glance, you might think this was an SR-71 Blackbird. However, there are several key differences that set it apart. Imbedded in the wings, and running their length, are the jet's powerful, square engines. A pair of canards sweeps out from either side of the cockpit help to stabilize the aircraft during high-speed flight and maneuvers. The back is entirely black, with a red-tinted canopy. The belly, however, is tactical gray, making it difficult to see when set against a cloudy sky. Also unlike the Blackbird, this jet is heavily armed for a reconnaissance plane. Each wing holds a twin-missile pod, and the middle of the belly opens up to a small bomb bay. There is also a pair of rear-mounted machineguns just behind the cockpit. Normally piggy-backed on the Night Raven is its customary drone, wielding a pair of 20mm machineguns.

Cobra Night Raven S³P (1986), Sky Raven (1990), Night Raven (2009) In 2009, a updated variant of the Right Raven was placed into service. This version could maneuver with precision even when flying in the upper atmosphere. The plane's flight controls included a voice activated weapons system linked to the pilot's flight helmet. The commands are initially programmed by MARS to be related in Gaelic (Fire: Tiene; Eject: Cur magh), but can be reprogrammed to to confirm to customer's native language. The automated and simplified controls allow the Night Raven to be flown with a much shorter training regiment, allowing them to be piloted by Air-Vipers as well as the more specialized Strato-Vipers.

No other plane used by either side could touch the incredible versatility of the Raven. During the course of time, Cobra Night Ravens were initially used for reconnaissance, where the planes limited stealth abilities and incredible cruising speed made it immune to interception. The Raven also found a place as a VIP transport, ferrying Cobra leaders to any location safely. The plane has also been used extensively as an interceptor, using long range radar-guided air-to-air

missiles stored internally to shoot down attacking bombers and fighters. The least performed task of the Raven is as a supersonic bomber, where it can be easily converted to carry a thermonuclear weapon to wipe out large military installations with a single long-range mission. Any information regarded specific missions performed by these fine aircraft is strictly classified for security purposes. The Night Raven is one of the only aircraft in Cobra's forces that does NOT have a vertical take-off and landing capability, making a short runway a necessity.

The crew of a Raven consists of a pilot, and a gunner/RIO (radio intercept officer.) The gunner controls a pair of rearward-facing 20mm automatic cannons to shoot down fighter aircraft.

The entire frame and skin of the Raven is made of titanium, much like the SR-71 on which the aircraft is heavily based. The armor is also corrugated and coated with a polished stealth paint which renders the aircraft even more radar invisible than the python coating applied to the Cobra Python Patrol Division. There are no external weapons to create drag, even the rearward-firing infrared air-to-air missiles are mounted in aerodynamic pods.

The 2009 variant of the Night Raven was a complete systems overhaul. The jet could now maneuver with precision even when flying in the upper atmosphere. The plane's updated flight controls allowed the Night Raven to be flown with a much shorter training regiment, allowing them to be piloted by Air-Vipers as well as the more specialized Strato-Vipers. Its armaments were enhanced with a nose-mounted, voice-activated pulse-laser, as well as an expanded artillery package.

Weaknesses: Compared to fighter jets, the original Night Raven had very Poor maneuverability and was unable to dogfight at subsonic speeds. Armament for such a large aircraft was poor, and many considered the Rattler to be a more effective bomber when stealth and high speed were not required. Much like the Soviet-built MiG-25, the Night Raven has design flaw which results in a catastrophic engine failure if Mach 3.5 is held for more than 3 minutes, resulting in the aircraft accelerating out of control causing the turbines to literally implode on themselves. The Night Raven is predictably expensive for Cobra to buy and almost as expensive to maintain and operate. As such, the number in service is thought to be fewer than 12. Improvements made in 2009 increased its maneuverability at high-speeds and amplified its air-to-air and air-to-ground fighting capabilities.