NEO-VIPERS are cold-blooded commandos whose minds and instincts have been altered to change them into superhuman warriors. Specialized units are trained in underwater combat, to defend M.A.R.S. marine bases from infiltration and attack.

The Neo-Viper program was initiated in the late 90s, and created their first deployable Vipers in 2002. The Program was disbanded in 2009, and the funding pulled from the program. Several of the remaining Neo-Vipers were used to create a new body for Over Kill.

In 2022, Scion brought a team of Neo-Vipers on an attack on the Pit. Embarrassingly enough, the entire squad was defeated by Flint alone.

Neo-Vipers are available on the MUX as Disposable Characters, with a much simpler application. They can also be apped directly as full character (format: Neo-Viper 1234), or upgraded from DCs to OCs. 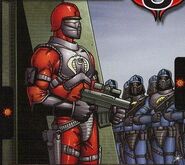 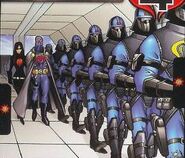