This page is for the Shattered Glass Universe character of Nemesis. For his evil twin, see Nemesis. For the admin who plays him, see Darksabrz. For the Decepticon spaceship, see Battleship Nemesis. 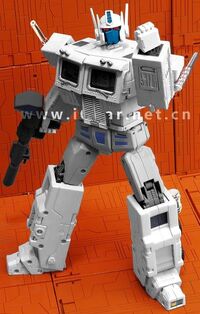 “What rises must fall; what has fallen will rise again.”

Originally a triplechanger scientist called Aries, then messenger of Unicron named Harbinger, the entity now known as NEMESIS is well aware of the fact that change is one of the universal constants. Nemesis chose to rebuild himself as a bright mirror of Optimus Prime, adding in a few twists and surprises to ensure the Autobots stay off-balance when it comes to dealing with this warrior of order. The trailer portion of his Cybertronian tractor trailer altmode can transform into a mobile base of operations, complete with repair facilities as well as additional firepower to augment his offensive capabilities.

Armed with an energo-axe, his trademark phased core-rifle and a quantum-plasma cannon, Nemesis is very well armed. However, his greatest weapon is not his physical capabilities, but rather his keen intellect and Unicronian-inherited technical capabilities -- which some might say rival the likes of Alpha Trion -- as well as a ingenious cunning that has served him well in his rise to the top as one of the most gifted engineers and scientists in the Decepticon Resistance. His only known weakness is his humility, which sometimes holds him back from speaking out even when he knows he’s right. However, even if he’s unwilling to trumpet his own successes, his dedication and genius in battle and in the lab nonetheless serve as a shining beacon to others.

Aries was a scientist devoted to the art of war, before a vision from Unicron, the god of order and light, made him rethink his profession. Renaming himself Harbinger, he devoted his life to spreading the word of Unicron to those that needed it. However, with the rise of Optimus Prime, Harbinger felt that a more active role was needed. Rebuilding himself into a bright reflection of Optimus, Harbinger rebranded himself once more, as a beacon of hope and light: Nemesis.

Nemesis was in charge of building the Nemesis. The Decepticons, in thanks, named it after him.

He now defends civilians from the Junkion assault.

Harbinger/Nemesis was created and is played by a CharStaffer at TFU. He also plays Banshee, Nightshade, Phantasm, and Phoenix.