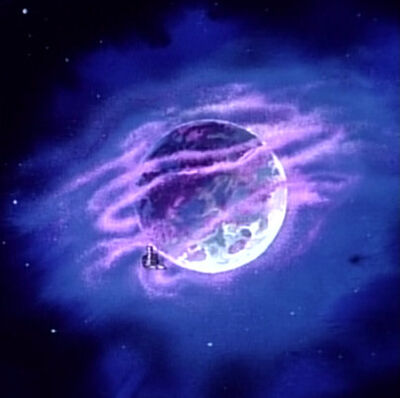 Nebulos (sometimes called Nebulon) is a planet inhabited by lifeforms, most notably a race of humanoids called Nebulans or Nebulons. The planet has four moons and two sets of parallel rings. Its average daily rotation is 18 hours, by Earth measurement. Its sun is called Omichlē, located on the Outer Rim of the Beta Quadrant on the Lower Plane of the Milky Way galaxy. Nebulos has at least seven moons, three of which are known as Caligo, Clara, and Magna.

Nebulanese is the native language of the Nebulans of Nebulos. News on the planet was reported by the Nebulan News Network.

Nebulos is a world whose inhabitants were enslaved by the Hive, a group of eleven Nebulon telekinetics whose focus on development of their mental powers had caused their bodies to wither, led by Lord Zarak. The populace is mainly forced to do routine farm work, watched over by the machines which the Hive control telepathically.

Ten thousand years ago, a conflict threatened to destroy the planet but the first incarnation of the World Watchers organisation defused it. In response to the near-disaster, the Nebulans turned away from the ways of war and locked away their weaponry under the watch of the, er, Watchers. The planet came under the rule of the democratic Council of Peers; an aristocracy existed as well.

A group of Autobots led by Bumblebee sought to relocate to Nebulos in order to escape their own millennia-old conflict on their own planet of Cybertron, but their arrival created dissension and mistrust within the Nebulan community.