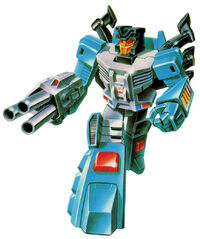 Despite his fierce appearance and formidable weaponry, Nautilator is actually a stumbling, bumbling amphibious foul-up. Originally a land-based warrior, he underwent adaptive reconstructive surgery for oceanic combat on Quintessa without ever being tested to see if he had an aptitude for the undersea environment. Once he joined the Seacons, it became apparent to everyone that he liked that environment - he just wasn't very capable within it. His fellow Seacons have had to haul his chassis out of tidal undertows more times than they care to admit. Some of them secretly whisper, "Let him drown," whenever he calls them for help nowadays. They're also fed up with having to retrieve him - almost every time he goes on one of his underwater exploratory excavation missions, he usually gets lost. And to make relations with his comrades even worse, he's always quick to blame them for his mistakes. But there are very good reasons why the Seacons usually come to Nautilator's aid, as Snaptrap explains, "If he didn't bring back an occasional lost nuclear bomb from the ocean bottom, we'd have left him down there to rust a long time ago."

In his lobster mode, Nautilator uses chemical, thermal, electrical, magnetic, seismic and sonic sensors located in his legs and tail to search for and detect underwater fuel deposits and other materials useful to the Quintesson cause. His claws have an unbreakable grip and can pierce the thickest of ship hulls with minimal effort. He wields a triple crusher cannon, a weapon that shoots energon bands that encircle and trap their target, tightening around it until only rubble remains. He can mount the cannon on his mouth, convert to weapons mode and use it in a stationary position, or use it on land in robot mode. In weapons mode, he can also convert it to a torpedo cannon. He combines with his fellow Seacons to form the super-robot Piranacon.

Nautilator suffers from a defective gyroscopic circuit center, which accounts for his poor navigational skills. He also rusts relatively easily, and can stay underwater for no longer than 4 hours without suffering damage.

Nautilator was with his fellow Seacons on the Quintesson sharship Bellum, awaiting deployment to Earth. However, when the drop pods were launched, Nautilator was left behind, and remained stuck on the Bellum until Dealiticus picked Nautilator up in the Solo and transported him to Earth.

In 2016 the Seacons attacked the Hydrax Spaceport and hijacked the Millennium Falcon and rechristened it The Hatemaker. They soon used the ship to attack the Central Spaceport in Ibex. Forced to retreat, they holed up in the sewers beneath Ibex, severely thrashing the first Autobot team that went after them. Soon after they used the underground tunnels to attack Iacon, setting off bombs in Trion Square and injuring dozens of civilians.

In 2022, Nautilator broke into the Autobot Ironworks during an attack and stole a massive amount of rarified energon.

On the MUX, the Seacons are a TP-Only group created by the Quintessons prior to their invasion of Earth. Nautilator is the Seacon Scavenger. =)

The Seacons are TP characters available for temping.

In the Shattered Glass universe, Nautilator is a heroic Decepticon.