Musique is an Autobot Mini-Cassette combiner. 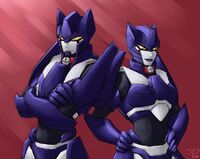 Musique is a skilled scout and a tape bot. She is one of a set - her counterpart a male tape bot by the name of Freestyle. She and Freestyle are close, though the nature and full scope of her and his relationship is still unknown. Musique is a spiritual, believing strongly in Vector Sigma. She also has a very kind heart and tries to find the good in everyone. She also a very hard worker finding something like zen in hard work.

Freestyle and Musique are young for transformers maybe even the last made on Cybertron during the war. Both were made at the same time side by side. They are almost identical though Freestyle is male shaped and Musique is female shaped. These two have a strong bond since they came online. They were not alone as tapebots they were made for a larger bot (Like Blaster or Soundwave) this bot name was Whisper. Whisper was a communication officer at an autobot base. The three of them work there the two tape bots running messages all over the base and sometimes even to the battle field. Besides their duties they learn about Vector Sigma and how to use Martial Arts to get closer to the super computer and their own spark. Then one day the base was attacked the autobots there fought hard but in the end the base was over ran. Whisper hide the tapebots away and lure off the Decepticons it cost him his life. The two tapebots hide there until there was no sound. They came out and found everyone dead in time they found Whisper body then his head. They morn over him for a long while before Freestyle leads them out of the broken down base. In time they discovered other autobots. They joined the war again this time as scouts which they thrived at.

Musique was created and is played by her creator.

Retrieved from "https://tfumux.fandom.com/wiki/Musique?oldid=69179"
Community content is available under CC-BY-SA unless otherwise noted.